There were so many interesting sidelights to the story of the Australian scientists who won the Nobel Prize for medicine last week. The most obvious, of course, was that the wackier of the two tested their ground-breaking discovery--that stomach ulcers were caused by a previously unknown bacteria, Helicobacter pylori--by actually drinking the stuff. It messed him up good: 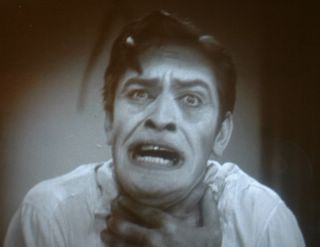 Next time put a head on it: Artist's conception of Australian
scientist Barry Marshall seconds after drinking a frosty mug of Helicobacter Pylori.
Less obvious was the scientists' corollary debunking of a couple of powerful 60s memes: that of the driven New Yorker--the adman, the scriptwriter, the creative, hurry-up, let's-run-it-up-the-flagpole-and-see-whose-pants-fall-down type; and of his near-opposite, the corporate apparatchik, for both of whom smoking and drinking and stress inevitably led to that most with-it of the wages of sin, the peptic ulcer.

But it was just a bug, eminently treatable with antibiotics, after all.

The really amazing (and beautiful) aspect of the story is the wealth of insights that have stemmed directly from the discovery of H. pylori. A few NYT articles give an idea:

Update: Damn, I always forget the trivia: What movie is the purported likeness of Barry Marshall taken from?

Posted by Focko Smitherman at 11:07 PM