The storm that whipped winds and heavy snow into blinding blizzards across parts of the San Juan Mountains on Christmas Day and today really had its sights set on one high-mountain town.

Silverton residents are calling the Christmas weather "a storm to remember." It dumped 4 feet of snow there, plunged the wind chill to minus 35 degrees and brought 60 mph winds screaming down from the peaks, making it impossible to see from house to house. The storm piled 8-foot-high drifts around town.

There was so much climate instability they had to close the ski areas:

Kendall Mountain — a small, town-operated ski hill — was closed because an ambulance wouldn't be able to get out of town in the event of an accident. Silverton Mountain, an extreme-terrain area frequented by hard-core skiers and boarders, was closed because the road out of Silverton to the area is impassable and the avalanche danger too high. . . .

Lawrence said the southwest part of the state, which has had an unusually snowy December, will begin to see some blue skies this weekend. But cold temperatures, a few more snow showers and winds will stick around for a few more days.

Seven mountain passes remained closed today. Besides the passes around Silverton, Wolf Creek near Pagosa Springs, Lizardhead near Telluride, and La Manga and Cumbres south of Alamosa are closed until they can be ploughed and avalanche-control work is done.

The next system is expected to roll in just in time for New Year's celebrations. 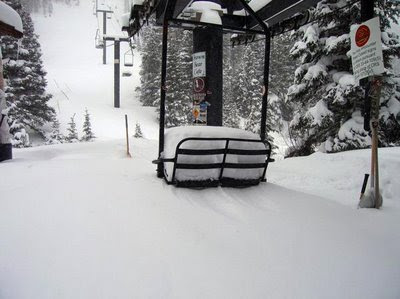 (Photo from Silverton Mountain and the Post.)
Posted by Focko Smitherman at 7:43 AM