My sister Sabra (I've always wondered just how many other non-Jewish women bear that name) sent me this strange photo, part of an old recruiting ad for Lincoln College in Lincoln, Illinois: 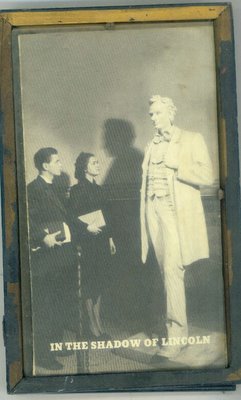 Believe it or not: The guy on the ri--left, rather,
is the Drunkablog's father.

No idea who the nobly thrust-chinned young woman is. Probably just some "jayhoo" (as my dad's mother would have called her).

The copy, naturally, is putrid: 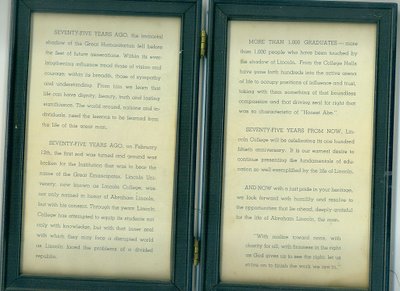 Hard to read, but it begins, "Seventy-five years ago, the immortal shadow of the Great Humanitarian fell before the feet of future generations." Yeesh. It also just happened to be the 75th anniversary of the college's founding (1865). So it was 1940 and dad was 24.

Oddly, besides being a little old for the student role, my father never even attended Lincoln College. My grandfather on my mother's side, however, did, around 1912. So, briefly and much later, did the Drunkablog, where he majored in drug abuse with a minor in Buckhorn beer. 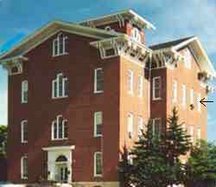 One broiling Friday afternoon during summer session, when University Hall was both wide open and nearly empty (one doubts things are still so casual), a friend and I skulked up to the padlocked 3rd floor door that led to the attic, took it off its hinges, and, after carefully replacing it to look undisturbed, skulked up the stairs. Just to have a look. We thought we were so cool.

And our curiosity was rewarded. The attic was empty, but the walls and ceiling were covered with students' names, class mottoes, drawings and "funny" sayings from as far back as the 1870s through (I think) the 1920s, when the attic was apparently closed for good to all but maintenance types and inspectors.

And I didn't have a camera. Damn.

Update: Check this out: I mentioned my long-ago little adventure to Sabra, and she said she had a good friend whose husband had something to do with security at Lincoln College. Today she called this friend, who said she thought it would be fine with her husband if we went up in the attic and looked around. So when I'm in Illinois in July that's what we're going to do. Bee-zarre. But if this comes off you can bet I'll have a bloody camera with me.

Update II: I can't find "jayhoo" in the wiki-list of American slang terms for either "promiscuous woman" or "prostitute." It should be in there. Later: Can't find it in any (free online) slang dictionary. Would one of the Drunkablog's many supremely literate, word-savvy, and wealthy readers happen to have a copy of the DARE? If so, please see if "jayhoo" is in it. Thank you.

Update III: Here's a watercolor of University Hall by an outfit that specializes in selling watercolors of college campuses. Hooray for capitalism.

Posted by Focko Smitherman at 12:27 AM