Horatio Alger quote of the week--illustrated!

First, I've been asked to remind all friends of the ho-quo that registration with local law enforcement is MANDATORY.

This week's ho-quo includes the original illustration, which fails utterly to match what Horatio describes. Drunkablog will do better. 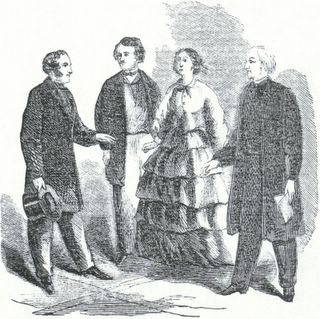 "'Wont [sic] you marry me?' She exclaimed; clasping her hands.

"'You—you must excuse me," said Tom edging off from her with alarm depicted upon his face.

"'Then how can I become the queen of Timbuctoo?' demanded the lady in a tone of anguish.

"'The queen of Timbuctoo!" repeated Tom in a ludicrous state of bewilderment.

"'Yes, you're the king of Timbuctoo, first consul to the emperor of Siam. Do you think I would have agreed to marry you otherwise?'

"'Then you're not willing to marry her?" asked the uncle.

"'Marry her! I'd rather marry a Cherokee squaw!'"

(via the Horatio Alger Digital Serials Project at Northern Illinois University, which, like Drunkablog, really needs to get a life.)
Posted by Focko Smitherman at 7:10 PM