Surfing the channels the other night I went by one of the most boring movies ever made, Gone With the Wind. Don't often tell stories about family stuff, but there's a connection. My father's first wife was Marcella Martin, who came close to winning the role of Scarlett O'Hara in the famous (in certain circles) "Search for Scarlett" which mogul David O. Selznick conducted at least half as a publicity stunt. She didn't get it (duh), but unlike, say, Joan Bennett, Lana Turner, Jean Arthur or Tallulah Bankhead (who also tested) she did manage to get another part. Here, I believe, is her only scene (though I won't swear to it because I've never made it through the whole crapfest):

Scarlett: Cathleen, who's that?

Scarlett: That man looking at us and smiling. The nasty, dark one.

Cathleen Calvert: My dear, don't you know? That's Rhett Butler. He's from Charleston. He has the most terrible reputation.

Scarlett: He looks as if... as if he knows what I look like without my shimmy.

Crucial. Her subsequent career was sub-mediocre, with only a couple of further movie appearances in such garbage as West of Tombstone, and some TV appearances, including with Jeff Bridges in an episode of The FBI and a year or two in some kind of role (probably a dowager) in the soap Another World in the mid-60s. She also did a lot of summer stock-type stuff. I found a couple of photos, but this is the only one large enough to post: 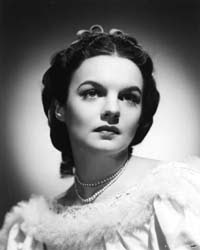 My sister and I found this same publicity shot in my grandmother's closet when she (my grandmother) died in 1998 at 105.

My dad was kind of an interesting guy. He grew up doing the grueling work required on a farm in Central Illinois, was educated in a one-room schoolhouse, went to Yale (the first person from Mason City who did, as I heard too many times) where he studied economics under future Nobel Prize-winner (and rigid Keynesian) James Tobin, went back to Illinois to make fine furniture, and died an alky's early death. I have no idea how he met Marcella, how long they were married (not long), or why they divorced. 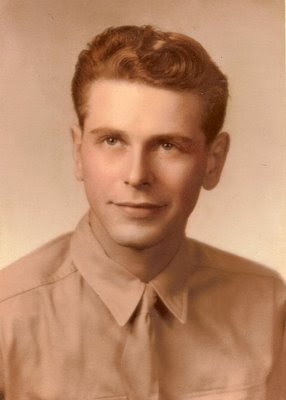 Handsome, wasn't he? And I look just like him (see Kenny Be's rendering of your darling D-blog, upper right sidebar). There are 90-year-old ladies who still put their palsied hands to their long-removed breasts and tell me, "He was the handsomest man I ever saw in my life."

I wait for my chance, then shove them down the stairs.

Update: One earlier dadegy.
Posted by Focko Smitherman at 6:31 PM