A while ago I mentioned that some fellow 'tards and I were going to canoe the wild (along here, anyway) Missouri River this month. We wanted to retrace the steps of Lewis and Clark, backwards of course (since they traveled upstream), and in high heels (well, that's what I wanted to do).

Now everything's changed. One of our number, doing something normally undangerous to arm muscles (Eating peanuts? Picking his nose? Waving at a passing clown? I forget) tore the hell out of his arm muscles, neccesitating surgery and a lengthy immobilization of the armal area.

We, the survivors, decided for that and other reasons to wait 'til next year for the Missouri and put together a last-minute trip on the faithful old Green River. 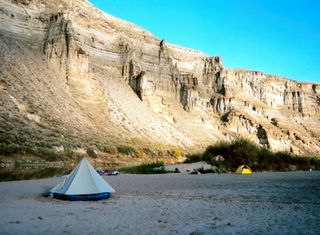 Utah's Green River: Yawn.
So I'm off Saturday and back September 12.

They think they're so big

I have begged, begged some of my internet heroes to guest blog here while I'm gone, but they were all too busy with their salad shooters or something. It's just possible, however, that the Drunkawife will pipe up now and again in this space. She's tan, rested and reluctant, so we'll see.

If she's worried about matching the incandescence of the Drunkablog's prose, regular readers if he had any would know that the Drunkawife could write "fart" over and over in every post and seem incomprehensibly erudite by comparison. In fact, a small segment of the Drunkablog audience (98.8% +/-) will prefer her keen social awareness and gentle humor to the present jerk's fart jokes and cruelty to animals.

In any case, when I get back there'll be river pictures to inflict and, since we're lousy outdoorspersons, perhaps a riveting tale of cannibalism and survival to relate.

(Salad shooter by computer illustrator Dave Douglass, who draws a mean camcorder, too, though his Tom Selleck scares the crap out of me.)
Posted by Focko Smitherman at 11:24 PM