The Drunkablog had no idea at the time, but Billy Bob, not often a trendsetter in the dog world, had canine flu back in August. At least, he was sneezing a lot and his little (well, big) nose seemed irritated. It was one of those, "if he's not better in a day or two I'll take him to the vet," deals, but he was. Better, I mean.

Tried to find a picture of the idiot looking sick or at least pensive to go with this story, but no luck. This was as close as I could get: 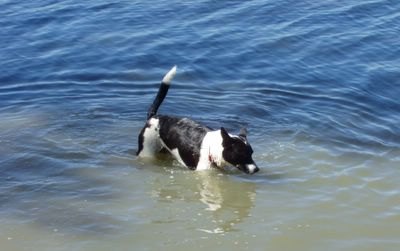 His tail has been captured by a tractor beam. Close enough.
Posted by Focko Smitherman at 8:43 PM