Well, at least Billy Bob was ecstatic at my triumphant return from the Green River: 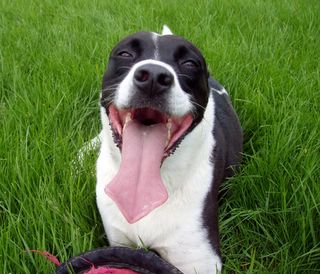 The Drunkawife? Eh. "Och, laddie," she said. "ye'er coom bahck." She'd promised to work on the "spontaneous foreign accent" thing while I was away, and now this.

So here are a few Green River pics. 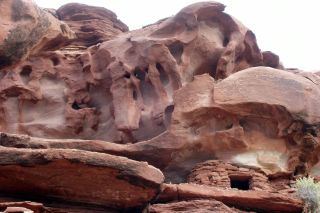 Landlord's nightmare: "For Rent"--forever. One rm. (10 sq. ft!) riv-vu. Utilities (bucket, ladder) incl.
The Anasazi apparently hung around the Green for only a couple of hundred years or so. No one knows exactly what happened to them, though many say a drought drove them away.

A member of our party, however, theorized that the Anasazi ("ancient evil" in Navaho according to this interesting scientific site (scroll down to "Vampyric theory--complete piece") simply ate too much peyote one day and wandered off, grinning. Many of them, he conjectured, later became Rolfers in San Francisco. 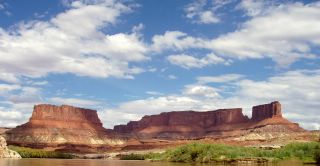 View near John Wesley Powell-named Turk's Head. He and his crew named other formations like "Nefertiti's Head" and "The Sphinx." All bear only a vague resemblance to the people or gods or whatever named, so I guess Powell was an Orientalist. 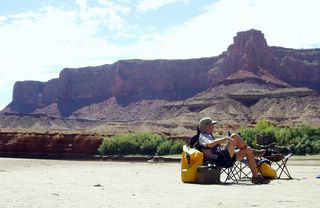 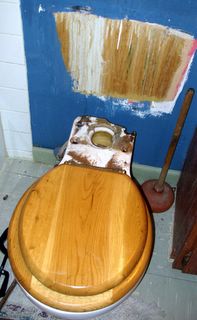 Yerch. Who knew a plumber's friend could be so destructive?

(Slumlord war declared via the Organization of Civic Rights, which for some reason has a problem with people like the Drunkablog who support their luxurious lifestyles on the backs of the poorest of the poor.)

Update: No, I did not "do anything" to Billy Bob's ears. Jeez, no one trusts me around my own stupid dog anymore. And somebody already said long ago that he looks like a cross between an Australian Cattle Dog and Gene Simmons, so you can all shut your kibble-holes.
Posted by Focko Smitherman at 11:23 PM