Well it's a start, anyhow:

DENVER — Bug scientists in seven states will unleash swarms of hungry Asian beetles tonight on a stubborn tree species that is choking life out of the West's waterways.

The beetles, no bigger than pencil erasers, should assault tamarisk, also known as salt cedar. The bushy tree sucks up hundreds of billions of gallons of water a year and crowds out native plants along creeks and rivers. It can grow up to a foot a month, to a height of 30 feet. The leaves secrete salt, making nothing else grow on the ground below.

Tamarisk was imported from Asia in the early 1800s as a garden ornamental and for windbreaks and other soil-stabilization projects. Its feathery pink-and white blossoms are common in creek beds and streams in many semi-arid parts of the West. [. . .]

It has taken root in more than 1.5 million acres from Mexico to Canada and from the Midwest to the Pacific. For decades, land managers across the West tried to get rid of tamarisk by cutting, burning, bulldozing and spraying it with herbicides. Their efforts — costing up to $3,000 an acre — yielded poor to mixed results. [. . .]

A canoeist gapes moronically at the tamarisk-infested banks of the Green River in southeastern Utah.

That led to the tamarisk leaf beetle, Diorhabda elongata. The insect, native to the same Asian regions where salt cedar comes from, is a voracious feeder that strips the tree of its leaves. Without leaves, there is no growth and no seeds to propagate.

Best of all, the beetles eat nothing else. While they were tested under quarantine, they "were fed all kinds of things, from broccoli and tomatoes to redwoods and more native plants. They don't go for anything else but tamarisk," says Dan Bean, a beetle scientist in Colorado.

"Some earlier tests at a dozen sites in California, Colorado, Montana, Nevada, Texas and Wyoming didn't work because of climate and daylight patterns different from the beetles' native habitat. Researchers are studying other strains of the beetle for release in the Southwest, where the tamarisk problem may be the worst."

Andrew Norton, a bug scientist from Colorado State University who will release beetles along the South Platte River north of here this evening, says the species has undergone more testing than any other bug in U.S. history for controlling plant invaders . [. . . ]

If successful, the beetle assault will take years to stop the spread of tamarisk, let alone allow native plants to re-establish. Thomas Stohlgren, a U.S. Geological Survey scientist who is mapping the spread of tamarisk, says the tree is moving beyond river zones to small agricultural ditches and even desert springs, "any place it can tap into the water supply."

A friend who canoed upper Labyrinth Canyon on the Green a few years ago said it was so choked with tamarisk it almost wasn't worth it. It has some incredible petroglyphs though, not least the Anasazis' attempt at a Weekly World News illustration: 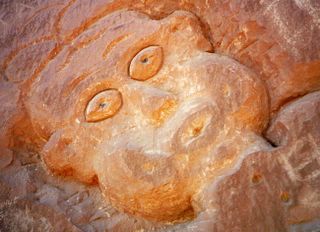 What're you lookin' at, jerkface? Space Alien Baby
annoys with psychotic stare.
Update: "Progress seen in fight against river-choking tamarisk?" What am I, the Rocky Mountain News? (Today the RMN has the headline, "Brown eyes diversity." Who are they, Van Morrison?)