It snowed this morning; only about the third time this winter. Three inches, maybe. Actually the mountains are getting plenty, it's just Denver that's being shortchanged. Always possible we'll get it all at once like we did in the blizzard of March 18-19, 2003 (worst snowstorm since 1913; I measured 36 inches, one yard, of snow in the back yard), but it's been crackling dry.

It's been very cold too (around 10 degrees) and nobody was at Sloan's Lake, so we let Billy Bob run: 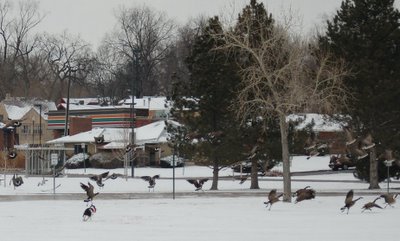 Hey, he's gotta eat too.
The Post has a cute dog pic in their snow story. If you like that sort of thing.

Update: the title "Killdozer!" obviously has nothing to do with the post. It's just another pathetic pander to the Drunkablog demographic.

Update II: That's twice in the last week I've (intentionally) insulted my readers, if any. Not bad.
Posted by Focko Smitherman at 6:30 PM