See you in PE, Porky

Look, I don't like bullies. Having been picked on far more than my share back when I was a (graduate) schoolboy, I know how humiliating bullying can be.

But honestly, if I saw this kid on the playground: 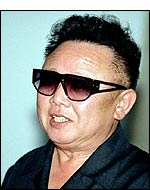 I don't think I could resist. Especially if he went around saying things like, "We will go to the negotiating table anytime if there are mature conditions for the six-party talks thanks to the concerted efforts of the parties concerned in the future," or,

"He also said that North Korea 'would as ever stand for the denuclearization of the Korean Peninsula and its position to seek a peaceful solution to the issue through dialogue remains unchanged.'"

You know, I wouldn't do anything too bad: take his glasses, give him a noogie, knock his books out of his arms--at worst, de-pants him. That's all. My friends who remember me in school, though, say I'm dreaming: Li'l Kim would kick my ass.
Posted by Focko Smitherman at 6:49 AM