Bet the neighborhood will be quieter

Hunter Thompson was a hero to me, as he was to most aspiring journalists in the 1980s. It was a requirement for membership in the Society of Aspiring Journalists back then. But I'll leave it to others to cover his indelible impact on journalism and, uh, lifestyle possibilities. Here I just want to point out a couple of interesting things in the reports of his suicide.

First was the family's statement, which began like this, according to the Denver Post: "On Feb. 20, Dr. Hunter S. Thompson took his life with a gunshot to the head at his fortified compound in Woody Creek, Colorado."

The Post goes on to say that Thompson was "[r]egarded as one of the most legendary writers of the 20th Century . . ." What the heck does that mean? If they had said one of the finest writers of the 20th Century one could simply have said pish, tosh and bosh. But probably they were referring to his propensity for public disturbance (often involving firearms) and drugs, which us folks in Denver got more frequent reports of than elsewhere. That was always fun, in an eye-rolling way: the good Doctor is off (or more likely on) his meds again.

Finally, AP quoted Paul Krassner: "'It was hard to say sometimes whether he was being provocative for its own sake or if he was just being drunk and stoned and irresponsible,' quipped Krassner, founder of the leftist publication The Realist and co-founder of the Youth International (YIPPIE) party." 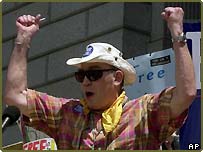 Posted by Focko Smitherman at 8:34 AM