In blog terms this story is older than the wax in grandpa's ears, as the saying goes, but what the heck, I'm a new blogger and I get to play a little catchup.

As everyone knows, the "counterinaugural" demonstrations in D.C. January 20 were a pathetic, if annoying, bust. And they were well-mocked at the time. But none of the usual blogosphere humor-persons bothered to deconstruct (i.e., make fun of) the counterinaugural news conferences held to publicize the demos earlier that month. Too easy, I guess. But nothing's too easy (or too old) for me, so I'll do it.

Then, voice quivering with Stalinist passion, Lytle announced the tools' punishment: no free food or booze at the counterinaugural ball. He was very forceful about this: "You're gonna have to pay to get in. Sorry guys [he wasn't sorry at all! You could tell!]. The free lunch is over." Not exactly lining them against the wall and shooting out their beastly livers, I guess, but you could tell the reporters were crushed. You mean we have to pay for our Vienna sausages and Mr. B at your crummy ball? Time for some soul-searching.

The second press conference was held by a (slightly) more comic coalition of the aggrieved, and featured the president of the National Alliance of Black Panthers, Shazza Nzingha: 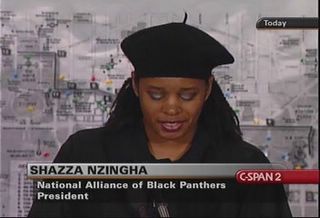 Shazza, while utterly in the possession of Satan, was nonetheless smartly turned out in a silky little (well, big) neo-Maoist confection topped by a perky Panther beret--just the right touch to pull the look together. She spouted the usual drivel as I drifted in and out of consciousness: "worse off now than we were in slavery . . . united with all oppressed people . . . people's uprising . . ." and so on. Nothing special.

Then there was this woman, Sarah Kaufman: 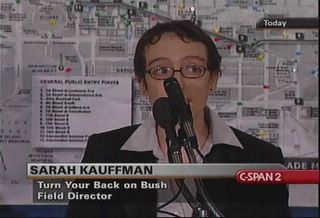 I don't remember anything she said (probably illegal-fascist-war stuff, huh? That a good guess?), just that she had a tiny head and looked like Mrs. Danvers in Rebecca:

Finally, there was Rebekah Abernathy, who ditched the tight perm in this Washington Post photo (she's second from right) for one of those artfully anarchist hairdos that's short but, you know, wild. She also got the only substantive question, posed by an intrepid reporter from the Waterbury (CT) Republican American: Are there going to be puppets? Yes, Rebekah said. She had an oddly deb-sounding voice for an anarchist, with that upward inflection at the end of every sentence, so that all her answers sounded like: We're going to have some giant Anarchist puppets? That can be seen through a crowd of people? And there's this one spider puppet that, like, symbolizes the system we're fighting against? And so on. Weird.

What's really remarkable about these "news" conferences is that even though they took place only a month ago, they sound like something from a different age, if not planet. Bush's reelection, the inauguration and, above all, the Iraq election make these revolutionaries sound only more like what they were already: mummies, hurling curses as they line up to be stuffed back in their sarcophagi.

Update: No, I did not specially select the above pics (except for Dame Judith) to make the subjects look goofy or ugly. These were the only ones on the C-Span site. Apparently nobody looks at them before they're posted.
Posted by Focko Smitherman at 5:46 PM