The Post, in an obvious dereliction of duty, has still not seen fit to mention the advent of Earth Hour tomorrow. Pravda, on the other hand, ever forward-looking, is teasing a story on its front page. The Post sucks. But not for that reason. Actually the Pravda story is only a few grafs of boilerplate from the World Wildlife Fund, as are the two stories it links to, one from China's Xinhua ("The Earth Hour event . . . was first started in Sydney of Australia in 2007 . . ."). But check out the first comment on the Pravda story. Apparently there are AoSHQ morons in Russia. Update: As has become another Australian tradition, noted greenie Tim Blair asks his readers what they'll be doing to observe Earth Hour. Update II: Slow to this, but: J'accuse! 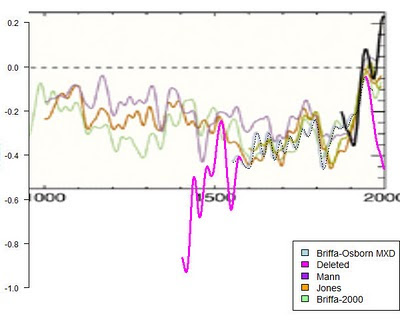 As Watts quotes Wikipedia (wha!) on the exclusion of outliers in a reply to a pooh-pooher downthread:


Deletion of outlier data is a controversial practice frowned on by many scientists and science instructors; while mathematical criteria provide an objective and quantitative method for data rejection, they do not make the practice more scientifically or methodologically sound, especially in small sets or where a normal distribution cannot be assumed. Rejection of outliers is more acceptable in areas of practice where the underlying model of the process being measured and the usual distribution of measurement error are confidently known. An outlier resulting from an instrument reading error may be excluded but it is desirable that the reading is at least verified. In regression problems, an alternative approach may be to only exclude points which exhibit a large degree of influence on the parameters, using a measure such as Cook's distance.[11]If a data point (or points) is excluded from the data analysis, this should be clearly stated on any subsequent report.


TORONTO — More Canadian municipalities are pledging to power down Saturday for Earth Hour, but an expert says interest in the event may already be fizzling.

Earth Hour has "done a great job of capturing the imagination of an awful lot of people around the world" to raise awareness of climate change issues, said Mark Sarner, who specializes in marketing for non-profits.

But "just more of the same gets old fast," he said Friday, noting most marketing campaigns will fade after a few years without something new to draw the public's attention.

"If I think back to last year's Earth Hour, I don't think it was as big a deal because, you know, novelty normalizes and this is no longer a novelty," he said.

Posted by Focko Smitherman at 6:35 AM