School districts across the country are adding healthier food in their lunchrooms, but one of the nation's leaders in the trend is finding it's a tough campaign to sustain if kids don't eat the food.

I recommend the method Vincent Price used to feed a reluctant Robert Morley an organic meal in Theater of Blood: 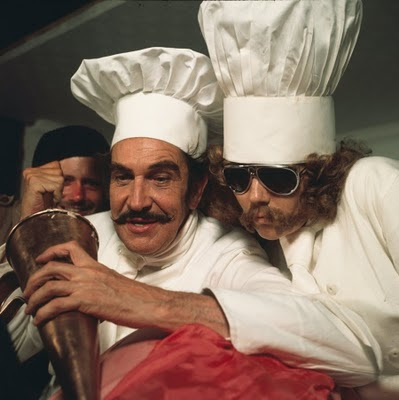 Sounds great, huh? Well, no, but even worse, something unexpected happened when the program began:

But the program, which was billed initially as revenue neutral, lost almost $700,000 in its first year despite a 25-cent increase in lunch prices — mostly because fewer kids signed up to eat than were expected.

The school district, with about 25,000 students, anticipated a 10 percent surge in participation with the new meals above the 26 percent participation but got only a 2 percent district-wide increase.

Participation varied from town to town.

For example, schools in Boulder and Louisville sold about 80,000 more meals during the year after they were made healthier, but students in Lafayette and Broomfield schools bought about 53,000 fewer. . . .

The district is now pushing a marketing campaign to sell at least 750 more meals a day — or at least 30 per school.

Schools will have daily tastings to preview the next day's meals, radio and print advertisements will tout the program and sports celebrities will make visits to cafeterias to urge kids to buy the lunches.

The district will pay for the campaign through grants and fundraising. . . .

"This is our great challenge," said Sylvia Tawse, a Boulder parent who founded a marketing firm that promotes the organic food industry. "I fully believe in the power of education. We have been feeding our kids into sickness. I think as (parents) start to absorb how bad it is for kids, I would hope they at least would say, 'I will buy lunch every other day.' "

Tawse was on the parent group that worked to bring Ann Cooper to Boulder as the director of nutrition services.

Cooper, known as the Renegade Lunch Lady [obviously a purely spontaneous nic], is a chef who once cooked for the Grateful Dead . . .

And we know how that worked out.

. . . led nutrition services for the Berkeley, Calif., school district [!] and is working with Whole Foods to donate salad bars to schools across the country.

Cooper, before being hired as Boulder's nutrition director, wrote a review of the district's lunchrooms, saying they resembled 7-Eleven stores and served "industrially grown and processed foods."

"Change is hard for everybody," Cooper said. "But we'll get the numbers. We're in a time where people really care about what they eat."

Just the kind of doublethink you'd expect from a state-empowered lunch lady: People are aware as never before that their kids are bloated, disease-raddled hulks, but we still need to mandate and coerce to get them to act.
Posted by Focko Smitherman at 6:25 AM