Being one of those writers nobody will hire (not in my case because I'm lazy and have no talent, but because, I'm told, I "smell bad") Drunkablog must try harder, so when I spotted this yesterday I had to investigate: 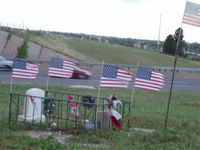 A headstone, sitting between the entrance and exit ramps for Broomfield on US 36. I've been on this stretch hundreds of times and never noticed it. But decorated for the fourth (I assume) it sticks out a little more.

So who's buried there? Civil War vet? Toothless old mountain man? Maybe a homesteader planted on the last bit of family farm. In any case, I thought, buried there is definitely a great post for the 4th.

Had to work for it, though. I parked in industrial hell and ran across all six lanes of Highway 36 plus various kinds of skank ground to get to it. And there were these holes everywhere: 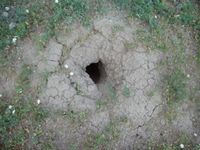 Prairie dog holes, I think, but whatever they are, they're all over, and they're big. And it was dusk. Prairie dogs feed at dusk. Luckily the city or the railroad or somebody left a pile of metal hunks for the convenience of innocent passersby: 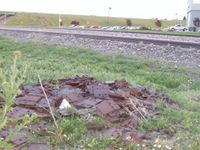 Thanks, men of the railroad!
Now I can brain the little bastards!

So anyway, I risk my life reaching this tombstone and who's buried there? 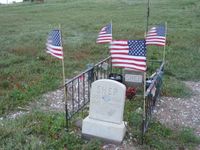 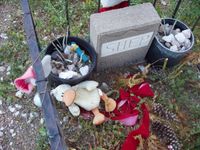 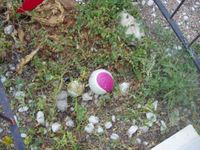 So, having investigated as much as a guy afraid of prairie dogs could, I went home and googled The Story of Shep (tollroad dog version). Pretty good, but not as good, in my opinion, as The Story of Shep (crated sheepherder version), a far better-known tale.

Posted by Focko Smitherman at 10:29 PM