Like most people, Drunkablog has often dreamt of visiting the Palmer College of Chiropractic in Davenport, Iowa. Last week, driving back from Illinois, he finally "seized" the opportunity to do so. And Drunkablog readers will caper in glee, because the "Fountainhead of Chiropractic" is as bizarre as anyone could hope. Too late for that tonight though. Instead here's a few other schools in Davenport, which has some nice ones:

Like Davenport West High School, which, oddly, shares
a building with. . . 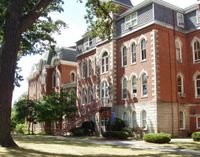 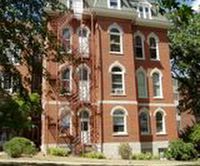 These schools, by the way, are all on the same street.