The Drunkawife is at the Rockies game with some group of activist chicks or other. Before she left we had a brief conversation:

D-a-W (with a heavy Russian accent): You are reedeeculous leetle man.

Me: Well, he's worse than Hitler.

Me: He must be arrested and tried for crimes against humanity.

Me: Thought you quit drinkin'.

Update: Dodgers 4, Rockies 3 in 11. There's gonna be a bunch of people in my yard in a minute to watch the fireworks from Coors Field. Release the hounds!

Dino WMD: Dinger was
ready for anything.

For fireworks games they move people from the cheap seats
to the outfield (easier to triage shrapnel wounds there). 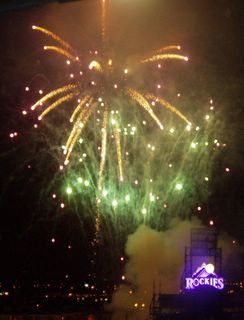 Then, boom.
(photos courtesy the Drunkawife)
Posted by Focko Smitherman at 7:28 PM