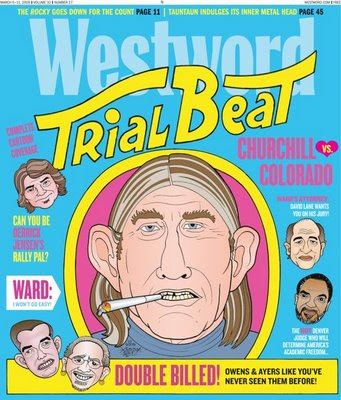 Pirate Ballerina is mentioned in one of Be's (as usual, not very funny) cartoons, but he didn't get his own caricature like the D-bog did.

Roberts doesn't think the trial will settle anything:

Jury members will get a chance to decide shortly -- but theirs probably won't be the last word. There'll almost certainly be myriad grounds for appeal no matter what conclusion they reach, and because both sides are highly motivated to win, expect an appeal -- perhaps several. All those Churchill critics who complained about the tax dollars he received over the years may now get the chance to see many more of them spent to justify his sacking.

Cheap, as they say, at twice the price.
Posted by Focko Smitherman at 7:37 AM