Not going to be at the trial today, even though I'll miss (rumor has it) the testimony of critical racist Derrick "I'm Senile, and I Support Ward!" Bell. Instead, here's a candid shot of Ward in court the other day: 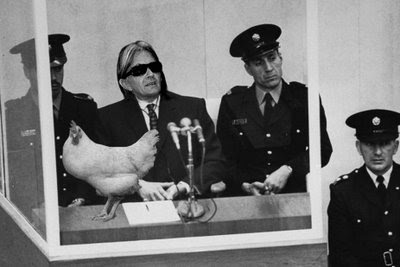 The banality of Billy Jerk.

Update: KOA just reported that Chutch attorney David Lane asked for a mistrial this morning ahead of Derrick Bell's testimony. Reasons unclear. Denied. This is a good sign. KOA also said Betsy "Terms of Endearment" Hoffman, ex-pres of CU, will testify this afternoon. Unleash the plan!

Update II: Locus of Evil in the World Today and anti-Churchillite leader Bill O'Reilly bombasted last night on the trial. Also, KOA said Hoffman testified by videotape, and the details they reported sounded just like what she'd said via vid the other day: unleash the plan!

Update IV: Here we go. Always forget to look at the Daily Camera (from 9:38 this morning):

Preeminent civil rights scholar Derrick Bell, who taught law at Harvard University and fought for diversification of faculty on university campuses, will testify before the jury shortly.

Right now, Bell, is answering questions without the jury present. The dry run was called for because Churchill lawyer David Lane and Denver District Judge Larry Naves disagreed on what type of responses from Bell would be admissible in court.

Bell, 78, is currently a visiting professor at New York University School of Law.

The judge and Lane are arguing over whether Bell can testify about whether he thinks the University of Colorado overreached in its decision to fire Churchill for what Lane called "minor transgressions."

Naves said soliciting such information from Bell would be tantamount to rendering a legal opinion on the case rather than a factual opinion and ruled it inappropriate.

Lane immediately entered a motion for a mistrial, which the judge denied.

Lane is now counseling Bell on his upcoming testimony and the jury will be brought in shortly.

So the jury didn't see Lane's tantrum. Rats. The Camera blog has more good stuff, including Bell's preening comments on critical race theory. The other day I described Betsy Hoffman as "depressed-looking" in the video played in court earlier in the week. The Camera's John Aguilar calls her "dour and a little haggard." Sexist pig.

Update V: The Camera's blog has a pic of Ward with one of his lawyers, Qusair Mohamedbhai, an associate in David Lane's firm. It's not the first time the erstwhile "camel jockey" has been in the news.

Update VI: Just a little more on Robert Williams' testimony yesterday. It was confusing, and Williams spoke so rapidly (he said it was a Lumbee thing) that the court reporter asked him to slow down at least half a dozen times. The upshot of his ramble, though, besides that the Churchill investigating committee was incompetent, was that they used inapplicable criteria--the standards of the American Historical Association. These, Williams said, being rooted in 19th century white racism, should not be applied to something as unique and precious as American Indian Studies.

In discussing Ward's description of the General Allotment Act of 1887, Williams tried to explain away his use of quotes around terms like "blood quantum," "mixed blood" and the like, as if taken verbatim from the act, by calling it "sarcasm." As every Indian studies scholar knows, he said, there are "hundreds" of federal definitions of Indianness, and Ward was merely using quotes ironically to point up the ridiculousness of the situation.

The reason Williams kept harping on the distinction between American Indian Studies and American Indian law was to discredit one member of the investigating committee in particular: Robert N. Clinton, a professor at ASU and an expert in Indian law. CU's lawyer O'Rourke neatly deflated Williams by asking on cross-examination if he knew that Clinton, like Williams, had started Indian studies programs, served as a tribal judge, and otherwise involved himself in non-legal Indian matters--the same sorts of things Williams had cited earlier in his qualification as an expert to show his expertness. Williams did not know that.

Update VII: In comments over at PB, Noj gently urges CU's lawyers to take the gloves off.

Update IX: Race to the Bottom has accounts of the morning and afternoon sessions. 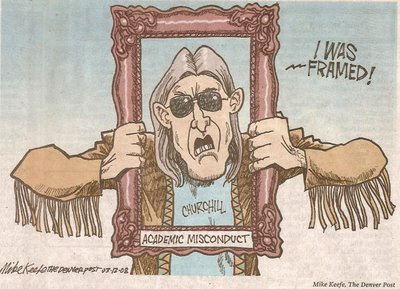 Almost.
Posted by Focko Smitherman at 9:43 AM