From the Ward-a-thon last night. I took shitboatloads of notes, but it was utterly unnecessary, not to mention pointless.

Security, as the Post notes, was tight, so much so that the thing started almost an hour late. It's okay, though, because of the three screens they've set up to show various Wart interviews and speeches (with cameos by Russell Means). Ward as firebrand. Ward as thoughtful academic. Ward as martyr. Gack. 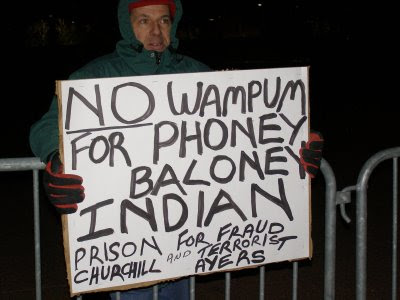 CU media honcho Bronson Hilliard just happens to sit right behind me. He says the media-savvy ginks of Students for TRUE whatever broached the idea of charging the media to record the event.

The media would have enjoyed that.

Two kids from the organizing groups kick things off with horrible speeches. One of them refers to "Hoobert Herver." 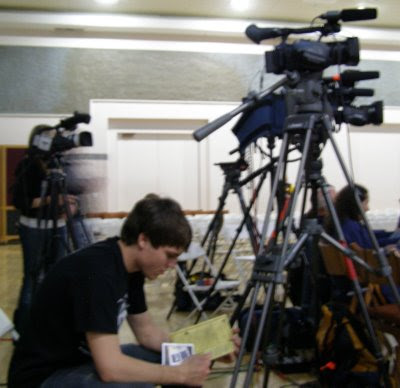 His phone rings as he begins. It's Chesa! (Small crowd applause for Chesa.) Bill doesn't take the call.

Talks again about being in Grant Park on election night. Words are already just washing over me: Change, controlling metaphor, participatory moment, every human being is of incalculable worth . . . (except the ones he wanted to kill or send to the Gulag). Teachers shouldn't be master and commander; they are on a voyage with their students--of course, the students can't read the maps, so it's bound to be kind of an aimless journey. . .

Now the line about the 8th grade social studies teacher fearing to bring up certain subjects because of what happened to Wart. Children (and of course felons) should have the right to vote . . .

He "regrets" that Weather Underground became "dogmatic," but that's about all. . . Act, then doubt, then act, then doubt . . .

The TBA guest turns out to be Derrick Jensen! Oh God, he's terrible. He can't figure out that he's not speaking into the mike. You can barely hear him.

If you can slide your premises by, he says, you've got them. Just what he's been doing for years. . .

Solutions for enviro degradation always posit a growing economy. Bad premises: the assumption we want the economy to grow; the assumption that we want it to exist at all . . . 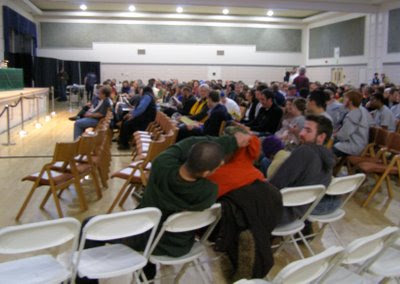 It makes him happy when the stock market goes down. (College kids: Yay!)

Whipporwills down 90% somewhere or other (me: yay!)

Oh, God, he's started a slide show. His heroes, whom others have called "terrorists": John Brown, Harriet Tubby, Jesus, Andrea Dworkin ("harden your heart and learn to kill"--Slimfast might have saved her life). . .

Ex-CU ethnic studies instructor Benjie Whitmer, also in a "security" t-shirt, has been standing directly behind Wart the whole time, as if waiting to catch any pearls of wisdom the great man might accidentally emit from the wrong end . . .

Derrick reads rapidly and unclearly as the slides slide by. Audience shifting in seats, some leaving. George Washington was the richest man in the colonies, and one of the most dishonest . . .

Only five or six more slides, Derrick says. Guy somewhere behind me yells "get it over with!" or words to that effect. Ward leaves, no doubt for a smoke break. People are whispering and looking around . . .

Aaron Smith of Student for TRUE stuff introduces Wart of course with a little speech. The CU faculty committees were dredged up, handpicked to oust Churchill . . . Don't believe everything you read in the now-defunct Rocky Mountain News (students cheer!).

Hello, my relatives. Leaves out his Ketoowah membership again. Introduces Shareef Aleem. "You don't put your hands on this black man" . . .

Only 30 faculty at CU backed me up, the rest participated in the subterfuge . . . Self-pity (and its concomitant, self-aggrandizement) is strong in this one.

First questioner claims 41% of students drugged so they don't disrupt class. For some reason Jensen answers: Pesticides are screwing up the kiddies too. Huh.

Aw, screw it. Perez moderates by nodding vigorously at anything the panel says. Ward says in answer to one question (maybe the College Rethug's) that he was fired for "jarring" sensibilities with the "Chickens" essay. Speaking of those in the Twin Towers: "How could you know that all 15,000 were innocent? Guess what, by virtue of being American you're not innocent . . .

Ayers responds to another question: regrets again "becoming dogmatic," but no "Oprah-like epiphany." What am I supposed to apologize for when we were killing 2000 innocents every month in Vietnam? I'm sick of people making heroes of criminals and criminals of heroes (he's clearly referring to himself here.)

Ward: I was southern Illinois coordinator for SDS when I first knew Billy (heh) and Billy didn't terrify me. What we did in Nam was
terrorism . . .

Whatever. It's late. Questions cut short. Free at last. 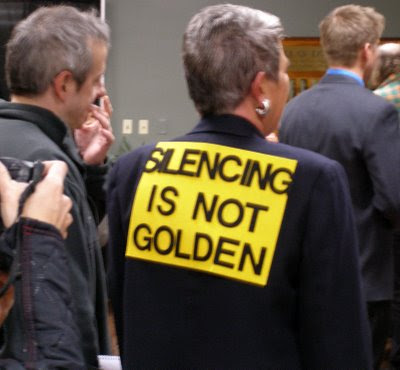 Update: Not many pics. Ennui glued me to my chair, an unfamiliar camera made for crappy shots. The Lonesome Dictator of Denver County will have more, and another spec-op filmed the whole sorry affair. I'll link.

Actually I should send you to the People's Press Collective, which shot the footage. (El Presidente's comments are good here, too). Enjoy!

Update III: Malkin: Ayers inks deal for graphic novelization of To Teach: The Journey of a Teacher. Bet he'll have a cape.

Update IV: The Daily Camera has video and a slideshow for all you big-pontificating-heads junkies.
Posted by Focko Smitherman at 7:59 AM