A 22-year-old Asian-American was repeatedly punched in the face early today in Boulder and forced to say "I love America," Boulder police reported.

The Asian-American victim told investigators that he was walking in the area of 10th and Marine streets with friends about 1 a.m., singing a song from the movie "Team America." He said they were confronted by four men.

One of the men — described as being a blond white male about 19 or 20 — said, "Do you think you are an American?" called him a "Chinaman," punched him in the face "multiple times" and told him to say that he loved America, police said.

A candidate member of the CU politburo was quick to make the worst of it:

CU vice chancellor for student affairs Julie Wong said any attack on a member of the "CU family or against any person in the community, whether affiliated with CU or not, is an attack against all of us collectively."

"This hate crime underscores the importance of our message of inclusion, diversity and acceptance," said Wong.

What it underscores is how the PC establishment uses the idiot acts of a few drunken morons (not to mention fake rape victims, noose-finders and car-defacers) to indict society as a whole while trumpeting their own indispensability in the necessary and overdue task of reeducating us.

Oh, and note the police sketch of the suspect. Lombroso was right.

A man in a red cape and sword climbed the pinnacle in front of the Boulder County Courthouse on the Pearl Street Mall, leading the chant with his sword.

Just like the DNC! In fact, it was probably Recreate-68's Mark Cohen, yearning for the good old days. 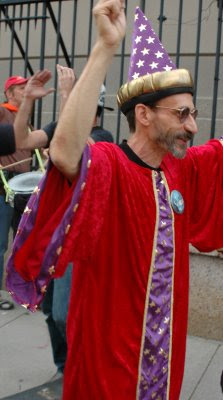 The group of runners, who annually shed their clothes and streak Pearl Street wearing only pumpkins over their heads, was huge this year -- and that was part of the concern for police, who have rarely ticketed runners in other years.

CU Rear Admiral for Deviant Affairs Julie Wong called for "dialogue" and "reconciliation" between the naked pumpkinheads and city police, while suggesting that racial profiling might have been involved in the arrests.

Update: Arrested pumpkinheads may have to register as sex offenders (via Complete Colorado).
Posted by Focko Smitherman at 7:13 AM