Third of arrested DNC protesters will go to trial

Manuca Salazar came to downtown Denver to protest the war in Iraq on the first day of the Democratic National Convention.

The protest ended Aug. 25 with Salazar in police custody for 10 hours. The 22-year-old Denver child-care worker is charged with, among other things, "throwing stones or missiles."

She denies it and says she didn't see anyone else throwing rocks, either.

"I wasn't violent at all," Salazar said.

Salazar is among more than one-third of the demonstrators arrested during the convention who are expected to fight the charges against them.

Of 154 people arrested, 29 have pleaded not guilty and are demanding jury trials, said Brian Vicente of the People's Law Project, which is lining up defense attorneys for those arrested. Vicente said he expects another 30 to demand jury trials when they go before a judge in October.

About 75 have pleaded guilty, said Vince DiCroce, director of prosecutions for the city attorneys office. . . .

Frank Anello, of Denver, said police grabbed him near the Auraria campus Aug. 24, the day before the convention began.

Anello, his pregnant wife and 3-year-old child were downtown to protest the war in Iraq.

He said the protest was already over, and Anello's wife was using a porta-potty when a Humvee full of police in riot gear arrived. He said he was arrested after refusing to give his name or let officers search his backpack.

Anello said his face was covered at the time. He had covered it during the protest because he didn't want police to identify him.

But, he said, police also had their faces covered.

Fair is fair. Sauce for the goose. A rolling stone gathers no moss.

The News has mugshots, too: 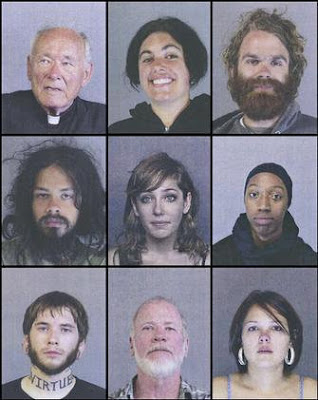 It's a bad hair extravaganza! (The twit with "VIRTUE" tattooed around his neck, incidentally, was charged with giving false information.)

Most of the 128 miscreants pictured were charged with interference with a police officer and obstructing a street, presumably for the failed first-day-of-the-DNC riot; many of those were also cited for "throwing missiles." Well over half were from out of state [update: see Update II]. The oldest person arrested was the holy man pictured upper left--77. The person from farthest away was--well, that's enough. No Spagz. No Benji.

More: Over at the People's Press Collective, the world's most hygenic dictator (he claims), El Presidente, notes that one DNC carbon-offset program actually netted a profit of $18.34 while reducing (theoretical) carbon emissions by almost one ton.

Update: Commenter Laurie did a statistical breakdown of the arrestees:

Although Recreate68 promised there would be "people of color" participating in the actions, only 7% of those arrested were Black and 6% were Hispanic. 87% were White.

The biggest representation of other states were from Washington, 6 arrested, Missouri, 5 and Kansas, 5.

Three young men, ages 18, 19 and unlisted, were foolish enough to have marijuana in their possession while committing acts of civil disobedience. Doh!

Miscellaneous: Three men wore collars indicating they were clergy. Three listed themselves as transients [probably not the same three--ed.] and a total of 5 had no information listed on their residence. There was one "John Doe".

Posted by Focko Smitherman at 6:51 PM