Jonah Goldberg posted some responses to his peeve at people in movies who "refer to 'World War I' before World War II takes place," and one reader, straying off-topic as readers do, mentioned how World War I was called "World War Eye" in a time-travel novel he had read: "The heroine, a girl from the 1890s, is briefly brought forward to the present day, and while looking around the hero's apartment, asks about the title of some book on his shelves, "What's World War Eye?" The hero just feels dismay that he'll have to tell her what's going to happen in the Twentieth Century. . ."

The novel, not named, was Time and Again by Jack Finney. Finney's highly original conceit was that his hero, Sy Morley, through a secret government program, was trained to "think" his way back in time by a systematic dissolution of the mental cords that bound him to the present. No time machine. It was probably my favorite book as a "young adult" reader, and I've re-read it many times as an old adult reader. Finney's evocation of his hero's wonder at actually making it back to the New York of the 1880s is indelible. Finney even has the audacity to make the Statue of Liberty's arm, sitting in Battery Park before it was soldered to the lady on Bedloe's Island, a crucial plot device. 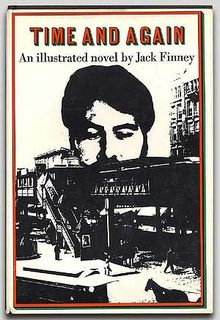 What's all this, then?

Finney also wrote Invasion of the Body Snatchers, which has been made into a film three times, and into a musical at least once. (I couldn't find any reviews of it, dammit.) He was apparently a bit of a queer duck as well, which is only appropriate. For one thing, he enjoyed fooling the Post Office by drawing his own postage stamps, which he would affix to letters and mail. They always got through.

Update: Forgot to mention that in the same scene of Time and Again Goldberg's reader mentions, the heroine sees television for the first time, and after clicking around and watching for a bit, utterly fascinated, asks Sy, "How can you bear to do anything else?"
Posted by Focko Smitherman at 6:27 PM