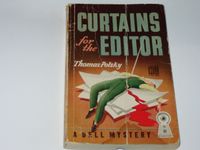 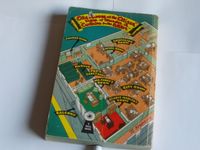 Take a look at Curtains for the Editor, which I bought years ago at Capitol Hill Books in Denver. Never read it, somehow, but what a cover. Curtains was part of Dell's "Mapback Series" of the 40s, and there are a lot of them out there. They have titles like The Corpse Came Calling and Just Around the Coroner, and probably none is worth reading, but if I were the sort I'd collect them.

Here's what the "Simpsons"-esque Shoporium's seller had to say about his copy:

A worn copy, as befits its age and literary quality. A deep crease up the middle of the cover is the most appalling blivet. There are other, milder crinkles, edge and corner ear, and heavy rubbing (with tears) along the edges of the spine. Thin wartime paper has turned tan. Binding is tight.

Heavy rubbing. Tight binding. Sexy lot, these bookish sorts. But what's with the term "blivet?" You get it from the context (a "most appalling blivet," the man says, no doubt in a snooty British accent), but as everybody knows, this is a blivet.

Anyway, check out the cool covers.
Posted by Focko Smitherman at 5:54 PM