Drunkie's "Believe It Or Not!"

How many times have you seen this? A typo in the title of a book. I've never seen such a thing, and I read at least a book a year, sometimes more. 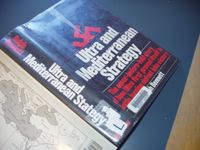 Stategy: When there's no time for strategery.

Ultra and Mediterranean Strategy, which I spotted at the Denver Central Library, was published in 1989 by William Morrow, a company that's been around forever and probably should have, you know, caught this one. But William Morrow is an imprint of HarperCollins, which in turn is owned by Rupert Murdoch's Newskkkorp. You know what that means:

Cheapskate crap-publisher runs its name all together to save a space but won't pay its editors enough to show up sober.

HarperCollins also claims to have published Solzehnitsyn, but I don't know what. The Glag Archipelago, probably.

Update II: I can actually see Pirsig burying a hatchet in Cokie's head. I can see it.

Posted by Focko Smitherman at 2:31 PM