Had to be downtown today, so I took some pictures of the amusingly un-PC Pioneer Monument at the intersection of Colfax and Broadway (the first one isn't mine, though): 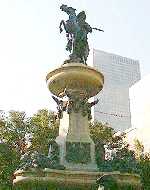 Pioneer monument: it's also a fountain!

That's Kit Carson up top. He's looking West, where he heroically spies more gold or furs or Indians to kill. 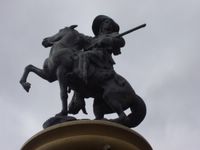 The monument was designed by Frederick MacMonnies to mark the end of the Smoky Hill Trail, the route many gold-seekers followed to Denver. MacMonnies apparently planned to top the monument with a bronze Indian, but Denverites, some of whom in 1910 no doubt remembered the Indian troubles, were outraged, and the brave was replaced by Carson. But even if built as planned, there still would have been plenty on the monument to offend modern sensibilities. Take this unregenerate specimen: 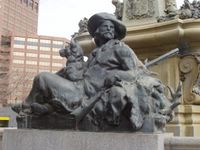 Or this "heroic" pioneer woman, constricted by her gender to the roles of babysitter and marksperson: 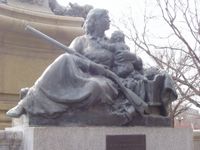 Actually, the only article on the monument I could find was a 1999 Westword story about a crazy guy who climbed it while supposedly wired with dynamite. He wasn't, but he still got his message of hope or whatever out to a despairing world:

I have been chosen by the leadership of the Church of Jesus Christ of Latter-day Saints (The Mormons) to serve as their endtime Son of Man. In their belief at the endtime they must themselves LITERALLY CRUCIFY their Son of Man in order to travel, along with their resurrected ancestors, to their three-tiered concept of heaven. Everyone else goes to hell. I value all life, including my own, and DO NOT wish to die under this sorcery. Please tell this to all Christians you know especially Christian pastors. They may very well understand.

Update: Wouldn't "The Skulking Churchills" be a great name for a polka band? (Apologies to DB.)

Posted by Focko Smitherman at 6:49 PM