The Drunkablog has had to dirty his dainty digits with real work in recent days, hence the lack of postages. It's been degrading and humiliating work, too, if that'll make regular readers feel better.

But what? You think blogging isn't degrading? Ha! (Is it okay if I say "Ha!"?) It's unbelievably degrading. Degrading isn't even the word. Well, maybe it is. "Sullying" is too Southern (ex: "Suh, I'll ask you to cease sullyin' mah dowtuh") and too hard to say, and I can't think of any other word at the moment. So "degrading" will have to do.

Oh yeah, the Montana State film students showed up and made their movie this weekend. I took some pics, but it wasn't transcendentally interesting. Here's one: 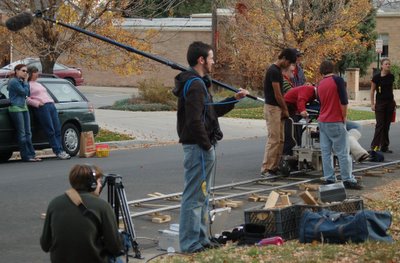 See, I kind of told somebody (the director, unfortunately) that I'd blog about the movie, but I don't really know much about it except that it's called Girls Like Flowers. I think the star is a ten-year-old (or so) boy, and they're making it both for class and to "pitch" (industry jargon) to festivals. You can see that they were equipped to do a tracking shot, which was pretty neat. And they seemed like a nice bunch.

Oh, and I found out why they came all the way down from Montana State to film in this neighborhood: 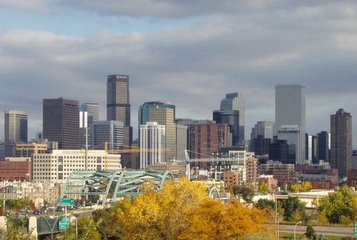 The view from the edge of the bluff.
Update: Man I love blogging. I mean, only to inflict useless facts on others would I ever have looked up where Montana State University is (meaning no offense to Montana State University). But I did, and it's in Bozeman (southwest corner of the state), which to the Drunkablog's dry and flaking brain means only one thing: it's the school Robert Pirsig wrote about (not favorably) without naming in Zen and the Art of Motorcycle Maintenance.

Update II: I really don't want to offend those friendly Montana State students. Pirsig taught there for two years from '59 to '61, probably before these kids' parents were born, and no doubt it's changed a lot since then. And it sure sits in a nice spot.
Posted by Focko Smitherman at 12:14 AM