Billy Bob has a rival at Sloan's Lake. Meet "Midnight" and his companion psychopath, whose name I didn't catch: 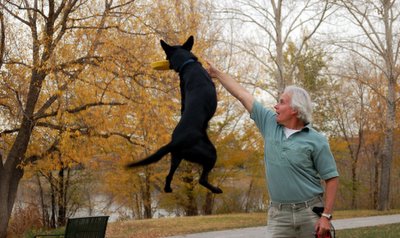 Oh, big deal: "Take his picture, take his picture, he can jump eight feet off the ground," the jerk says. Heck, I've got millions of pictures of Billy Bob jumping higher than that; I just don't like to show off like you do. 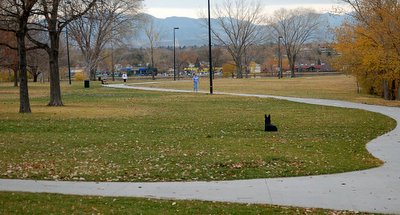 "I've been training him since he was a puppy," the guy says. So when do you think I started training Billy Bob, you dribbling gargoyle? When do you think anyone starts training his dog, you Jake Jabs-looking freak (Colorado joke)? Sheez. Click on the picture. See the tiny figure between the trees at far left? That's Jake. He's showing me how well Midnight "stays." Well la-de-frickin'-da. I seem to remember reading somewhere (Business Week?) that only gay dogs "stay" well; Midnight sure looks a little light in the loafers to me.

Besides not being (quite) as gay as Midnight, Billy Bob is also much smarter.

Not as smart as geese, though, which are almost as smart as turkeys. Look how they hide the frisbee from the mor--I mean, from Billy Bob (frisbee, far right; Billy Bob, far left). Munch a path to the prize, noble hound! (You'd better, because there'll be no Kibble tonight.)

Update: The Drunkawife, asked whether your correspondent sounded somewhat, you know, anti-gay in calling Midnight "light in the loafers," even in complete and utter jest, said that I should probably add somewhere, "Not that there's anything wrong with that." In fact, I was merely trying to insult myself as a dimwit bigot and, as usual, did too good a job.

No Kibble tonight in my coffee.

No Kibble tonight in my tea.