Green River photos by "Mr. B"

These fine shots were taken this past September by the multi-talented "Mr. B," also known to family and law enforcement as Robert "Butch" Burnham of Peoria, Illinois, one of the regulars on our river trips. Butch used his trusty Nikon D-70, a camera so impressive that when my poor little Olympus imploded a couple weeks ago, I bought the junior or "Jimmy Olsen" model, the D-50.

Anyway, I've added explanatory comments; just think of me as your friendly interpretive guide. Just don't touch anything or I'll bash your bloody head in with my stick. 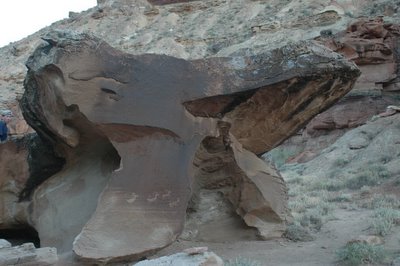 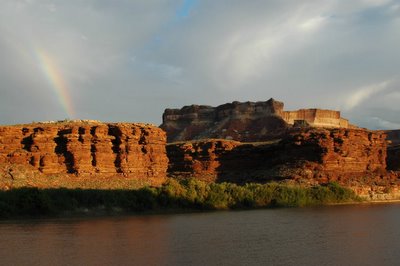 Check this out. It was taken from Turk's Head (at top in this picture), and shows the view across the river at dusk. We were shouldering each other out of the way to get a good angle on this shot. Standing on a cliff, too. We're all kind of, you know, dimwits, camping-wise. 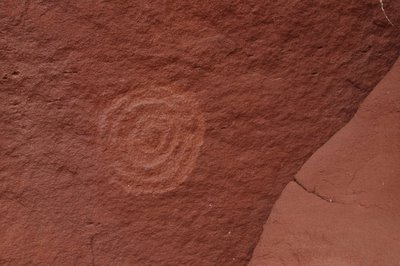 The Anasazi apparently liked to ingest hallucinatory drugs, sit in the sun, and draw. In stone. Think the artist who drew this seven or eight hundred years ago would have liked a Spirograph for Christmas? (And did you know the Spirograph was invented by Richard Nixon's disgraced vice-president, Spiro "Graph" Agnew? Swear to God.) 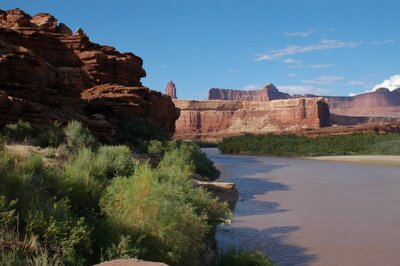 Another view from Turk's Head, this time looking upriver.
Wonder if John Ford was ever on the Green.

More Green River maunderings and pics here, here, here, and here. Gotta get me some categories.

Update: Thanks to Norm Geras at Normblog for the links.

Update II: In the interests of ecological and historical accuracy, I should point out that the gamboling Bullwinkles are not actually gamboling; they are running in fear from what looks like a space robot (lower right) wielding a bow and arrow. Hey, anybody remember Erich "Crazy" Van Daniken? He did pretty well with that kind of stuff, didn't he?

Posted by Focko Smitherman at 11:24 PM