Andrew Bolt has it:

Hackers have broken into the data base of the Hadley GRU unit - one of the world’s leading [climate] alarmist centres - and put the files they stole on the Internet, on the grounds that the science is too important to be kept under wraps.

The ethics of this are dubious, to say the least. But the files suggest, on a very preliminary glance, some other very dubious practices, too, and a lot of collusion - sometimes called “peer review”. Or even conspiracy.

A warning, of course. We can only say with a 90 per cent confidence interval that these emails are real.

And his latest update:

8.15 PM UPDATE: The Hadley CRU director admits the emails seem to be genuine:

The director of Britain’s leading Climate Research Unit, Phil Jones, has told Investigate magazine’s TGIF Edition tonight ..."It was a hacker. We were aware of this about three or four days ago that someone had hacked into our system and taken and copied loads of data files and emails."…

TGIF asked Jones about the controversial email discussing “hiding the decline”, and Jones explained what he was trying to say….

So the 1079 emails and 72 documents seem indeed evidence of a scandal involving most of the most prominent scientists pushing the man-made warming theory - a scandal that is one of the greatest in modern science. I’ve been adding some of the most astonishing in updates below - emails suggesting conspiracy, collusion in exaggerating warming data, possibly illegal destruction of embarrassing information, organised resistance to disclosure, manipulation of data, private admissions of flaws in their public claims and much more. If it is as it now seems, never again will “peer review” be used to shout down sceptics.

This is clearly not the work of some hacker, but of an insider who’s now blown the whistle.

I left out Bolt's links. Read the whole thing. And they're going nuts over at WattsUpWithThat.

Update: RealClimate, the leading pro-AGW blog, finally responds, and doesn't deny that the e-mails and data are genuine. Lots of mealy-mouthedness, of course. "This is the way scientists talk to each other in private," etc.

Update II (11/22/09): I love this. The Grauniad, after posting one weak and biased "news" story and one even more biased thumbsucker on Friday, has this on its front page today: "Climate change sceptics and lobbyists put world at risk, says top adviser"

Climate change sceptics and fossil fuel companies that have lobbied against action on greenhouse gas emissions have squandered the world's chance to avoid dangerous global warming, a key adviser to the government has said.

Aw, rats. Guess we can pack it in then.

Professor Bob Watson, chief scientist at the department for environment and rural affairs, said a decade of inaction on climate change meant it was now virtually impossible to limit global temperature rise to 2C. He said the delay meant the world would now do well to stabilise warming between 3C and 4C.

Wiki on Watson. A bigwig, no? Notice though that the Guardian doesn't mention his affiliation with the University of East Anglia, home of the Climate Research Unit.

In an interview with the Guardian, Watson said: "Those that have opposed a deal on climate, which would include elements of the fossil fuel industry, have clearly made making a 2C target much, much harder, if not impossible. They've clearly put the world at risk of far more adverse effects of climate change.". . .

The British government last month published a map that laid out the stark details of a world warmer by 4C. It showed that the rise would not be evenly spread across the globe, with temperature rises much larger than 4C in high latitudes such as the Arctic. Because the sea warms more slowly, average land temperature will increase by 5.5C, which scientists said would shrink yields for all major cereal crops on all regions of production. A 4C rise would also have a major impact on water availability, with supplies limited to an extra billion people by 2080.

Watson backed controversial calls for research into geoengineering techniques, such as blocking the sun [excellent!], as a way to head off dangerous temperature rise – one of the most senior figures so far to do so. "We should at least be looking at it. I would see what the theoretical models say, and ask ourselves the question: how can we do medium-sized experiments in the field?"

Such an effort could divert attention and funds from efforts to cut carbon and switch to cleaner technology, he said. "I think it should be a real international effort, so it isn't just the UK funding it."

Update III: The Harry_Read_Me.txt file examined at Devil's Kitchen (the word "clusterfuck" is used repeatedly by the blogger, though with asterisks. We don't need no stinkin' asterisks here). 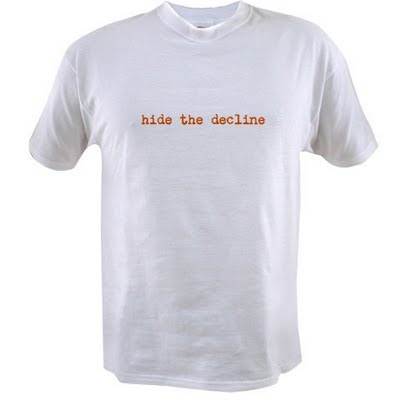 Update V: OMFG. Bolta on George Monbiot, the biggest GW idiot in the MSM (non-US division), finally having his eyes pried open: "Even Monbiot says the science now needs 'reanalyising'" No quotes, just read. This keeps getting better and better.

Update VI: BTW, information wants to be free. Anybody got an idea why?

At least half the years in the next decade will be warmer than the previous record year for global temperatures and next year could be the warmest to date, according to the Met Office. . . .

The Met Office’s Hadley Centre announced its predictions as a separate scientific analysis showed that previous estimates about the rate of temperature rise had been too low. The Potsdam Institute for Climate Impact Research said the planet could warm by 7C (10.8F). The increase would make large parts of the planet uninhabitable. . . .

Update VIII: It just keeps getting better and better (read comments, too, then go back to the home page and scroll for more hijinks!)
Posted by Focko Smitherman at 10:47 AM