As I was saying, I have weird neighbors. On all sides. Always. This, for example, is the house of my current across-the-street neighbor, John: 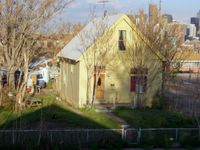 John is so weird I've never had the courage to take his picture. Instead, I asked the fine dead character actor Henry Jones to assay John's psychology: 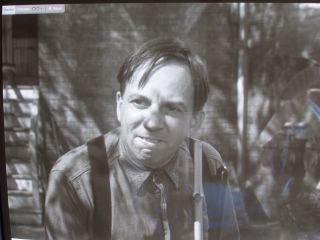 Despite his irascibility, though, John has long rented his attic to a revolving night gallery of the pierced, the tattooed and the giganto-panted. Last year, however, was different: his tenant, a young woman going under the name Amanda, seemed unusually normal. From my office window I used to see her peddling off to work mornings on her big-fendered old bike. Sometimes she'd wear kneesocks, or carry a little bag lunch. Kind of cute, I thought.

But as most of us eventually learn, kneesocks are not a reliable indicator of character. Amanda, it turns out, was the distillation of evil. At least, according to John. I learned this when I found a leaflet from John in my mailbox. It was--well, here's how it starts (all illiteracies in the original, I claim):

TO OUR FRIENDS AND NEIGHBORS IN-------. We very much need both to talk with a former housemate and to secure (from you) any info that might help this happen. Last April, Amanda [redacted] (and her little dog too!) moved into the top half of our house and lived there until mid-December when, unfortunately, we were
compelled to request that she live elsewhere and to insist that she leave immediately.

John indulges in a little character development here. Amanda is "a solitary figure [who] circles (repeatedly, sometimes obsessively) a property's peripheries and, errily also stops at (& even stares into) the properties' windows." Amanda does this, John implies, as the mastermind of a burglary ring. Even Amanda's little dog "Freckles," whom John defames as "anorexic" (he's just nervous) comes under suspicion as we are implored to "WATCH THE ALLEYS" for the two. 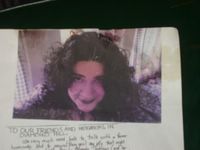 Amanda, as imagineered by John. Now think about those cute little kneesocks--wrapped around your neck.

Then comes the peroration:

Your call about these kinds of unusual behaviors (and of the disturbing behaviors (around local burglaries) might be the call that makes 'the difference'... the difference to us, the difference to our Community. Though we may not yet know each other by name, I bet that we residents, share so much more than shopping at Safeway. Like working hard. Like wanting homes that are comforable and safe . . . for the families they shelter and the friends that gather. . . . Here's to our working together!

Well now, ain't he civic-minded (please refer to pic of Henry Jones above). Uh, no. Here's the note John posted on his mailbox, conveying somewhat different sentiments to Amanda: 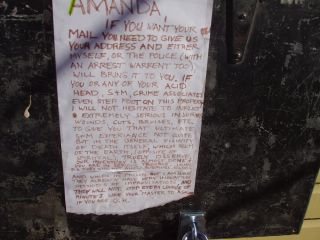 The final paragraph is a little difficult to read:

I will not hesitate to inflict extremely serious injuries wounds cut bruises etc., to give you that ultimate S & M experience not quite but in the general vicinity of death itself which scum of the earth (as opposed to spiritual) truely deserve. Our inventory is almost done: you are in serious trouble--John.

Then, perhaps sensing he'd gone too far, John concludes with a conciliatory p.s.:

On his mailbox. Oh, and just the other day I happened to be in the alley behind his garage. John has posted this sign: 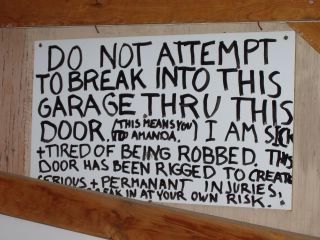 Lying directly below the sign is (I swear by Dave Barry I am not making this up) a dead skunk. I have pictures, but they're really gross (dead skunk pic, $15). I can't swear it was placed there intentionally, but it's too perfect (you know, in a sick way) not to have been.

So, there's another neighbor. I have lots more, and you can look forward to hearing about many of them as this blog grows. Or whatever it does. C'mon, I have to live next door to these people. The least you can do is read about them. Cheerfully, please.
Posted by Focko Smitherman at 10:30 PM