Just a couple of things. Teased on the front page, a parody, or something (I thought parodies were supposed to be funny) of GWB's Decision Points. Typical kneeslapper that also Really Makes You Think:

Quitting drinking was the toughest decision I've ever made. Those closest to me were begging me to carry on. "Think what you're doing, George," they cried. "If you do get sober, you'll go on to be president and wreck the lives of countless people. Do us all a favour and keep getting legless." I'm happy to say the only legless people these days are the US servicemen returning from Afghanistan. 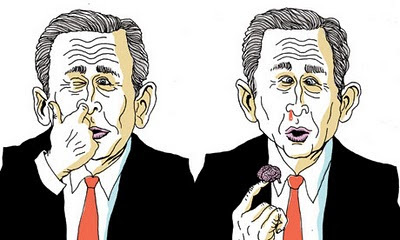 Accompanying art. I don't get it.

Most of the comments add up to: haaaaaaaaack.

On the environment page, an interview (from a forthcoming piece in Nature) with Dr. Phil Jones (say it like Tommy Lee Jones says "Dr. Richard Kimble" in The Fugitive) on the anniversary (almost) of the release of the Climategate e-mails (which were stolen, by the way). (Too many parentheses in that sentence.)

Not quite a tongue-bath, surprisingly, but obviously on Jones' side. I'd forgotten this, but back in February Jones said he would submit a correction to Nature about data from Chinese weather stations they'd published back in 1990. Now he takes it back:

Jones now says that is unnecesary. He said that he had been under pressure to concede errors earlier this year and had been on medication when he had given the interview to Nature in February. The idea that measuring stations had moved in China had been misinterpreted, he said, because his paper had talked of 84 stations from a larger group of 265. For his paper, Jones said he had chosen those measuring stations that had moved the least.

Jones also insists that he did not delete any emails that had been requested from him through the Freedom of Information (FOI) Act. Pre-emptive deleting of emails that might be requested in FOI requests in future is not against the law but the Muir Russell report pointed out that such actions went against the spirit and intent of the regulations. And that there was some evidence that this had happened at the CRU.

"You can't second guess what's going to be requested," said Jones, "I deleted them based on their dates. It was to keep the e-mails under control."

Most damagingly, in one email Jones urged colleagues to delete messages in which they discussed the preparation of a report for the Intergovernmental Panel on Climate Change.

When asked why he did it, he told Nature: "That was probably just bravado at the time," he says. "We just thought if they're going to ask for more, we might as well not have them."

But they weren't, you understand, actually deleted.

Update: WUWT has a post on Jones' "rehabilitation" based on the Nature piece itself.
Posted by Focko Smitherman at 3:02 PM