Churchill loses in court of appeals

Apparently those "good vibes" Chutch attorney David Lane got from two of the three judges during arguments last month were just gas. The decision was unanimous: Churchill's firing was legal and by the book. Here's the decision (pdf). Just skimming it right now, but if anything stands up and pokes me in the eye I'll update.

[Churchill] states that the investigation caused him to miss deadlines and to default on unspecified book contracts. He also claims that third parties cancelled speaking engagements and the alumni association withheld an award from him. As to the former contentions, the record is devoid of any proof of damage or causation. As to the latter cancellations and the withholding of the award, the University did not take these actions and therefore they do not constitute an adverse employment action.

No award! Call the wahhhhhhmbulance! (Yes, that one should be honorably retired.) As for the alleged book contracts, I vaguely remember Wart saying (apparently not at trial) that he had four books in various stages of writing which the investigation and trial had prevented him from completing. Now it's been over a year and a half since his trial ended, and all he's produced is a foreword or two, one for a comic book. I doubt he's spent the time looking up case cites for Lane.

Update IV: Caplis: "Tremendous cause for celebration." That's it? Bleh.

Update V: Oops, spoke too soon. Lane is gonna be on next.

Update VI: Rats, had to take a phone call, but could kind of half-ass listen. Caplis let Lane keep the focus completely on the jury when at this point their verdict is kind of, you know, moot. Not one question (that I heard, anyway) about qualified immunity. Good job, Dan.

Update VII: Here's the podcast of Caplis's interview with Lane. It starts about 11:33 in.

Update VIII: The Gamera's story; CS Gazette; 7News. None has much new info, but the Wart-love in the comments is fun. Fave comment so far is at the 9News site: "A great picture of Ward. He looks exactly like an old Romanian woman who lost her donkey cart. What a stooge." 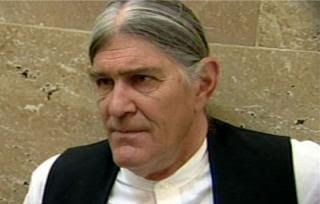 Update IX: The Little Churchills at the Wart Slobidarity Network have Churchill's reaction (though it isn't in quotes) (and no permalinks either, the morons):

Aside from that last, yup.
Posted by Focko Smitherman at 9:31 AM