The Post today: "Hickenlooper unsure about what to do about Occupy Denver protesters at Capitol":

Gov. John Hickenlooper didn't give a clear answer to that question Tuesday when asked about the growing Occupy Denver tent camp on a grassy lawn along Broadway that is part of the state Capitol complex.

Interviewed on radio station KOA-AM's Mike Rosen Show, the Democratic governor and former Denver mayor said he was concerned about the illegal encampment on state property but didn't indicate that he was prepared to order the State Patrol to clear out the park. Patrol officials said Sunday that they had no plans to remove the tents. . . .


The governor seemed conflicted on the question of what to do about the tents, saying that he has "always supported the First Amendment" but had concerns about the camp.

"I will confess I worry about the precedent," Hickenlooper said. "If suddenly we have a park where people can camp out whenever they want, why not the next park and why not the park after that? And then suddenly, you don't have any rules."

In any case, the governor said, there weren't many tents on the lawn, saying: "I went down there this morning, and there were like eight tents, 10 tents. This is not a burgeoning metropolis of tents."

I was down there a couple of hours after the Gov. There are a few more than eight tents: 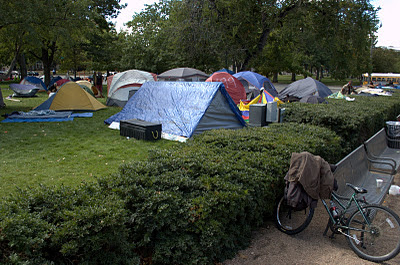 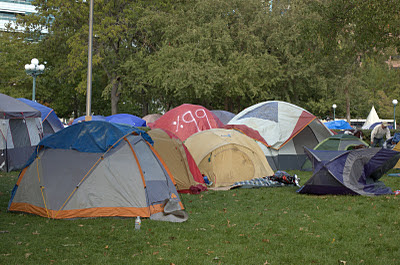 I counted about 50, and a guy calling in to Rosen right now says he counted 80 tents today.

Burgeoning. Not that I give a rat's ass, except for one thing: The occupods are getting special treatment. During the DNC when Chickenpooper was mayor of Denver, he vacillated on whether to allow those protesters to camp in city parks, but ultimately made the right decision, followed the law and banned them. Wonder what the diff is here (he asked rhetorically)? 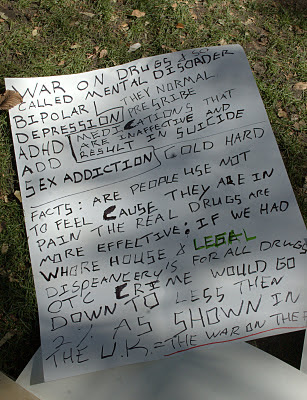 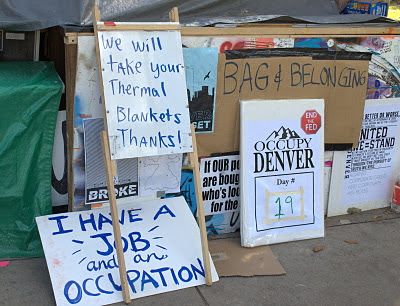 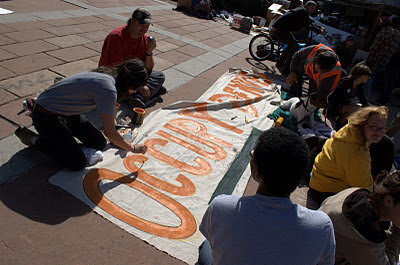 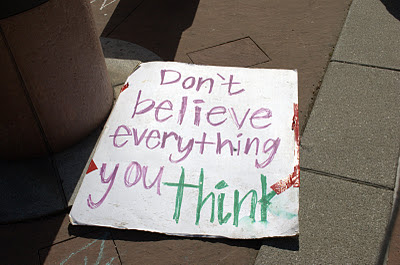 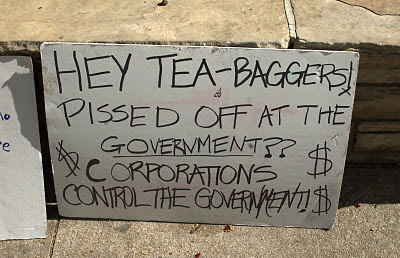 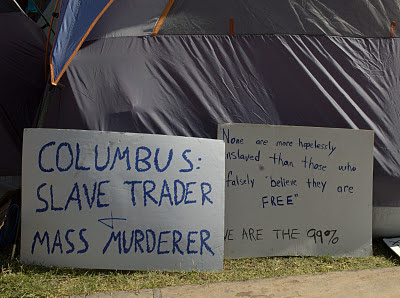 Left over from the Columbus Day protest Saturday. 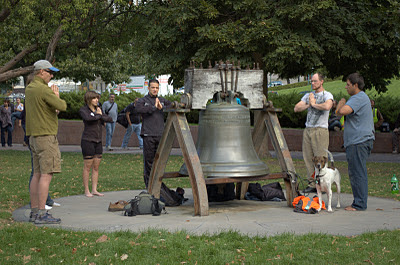 Zen around the fake Liberty Bell.

Construction workers eating lunch and getting ready to kick some hippie ass, but mostly eating lunch.

Update: Rosen keeps referring to the gathering as a "shantytown," which, since there are no shanties, is inaccurate but appropriately scornful.
Posted by Focko Smitherman at 8:33 AM