Ten Nights in a Bar-Room

Our anonymous narrator is making his first foray into the "Sickle and Sheaf" tavern in Cedarville, meeting the characters whose rum-fueled trajectories he will trace over subsequent visits:

And Judge Lyman, was he a man of principle? One with whom it was safe to trust a youth like Willie Hammond?

While I mused thus, the bar-room door opened, and a man past the prime of life, with a somewhat florid face, which gave a strong relief to the hair that, suffered to grow freely, was pushed back, and lay in heavy masses on his coat collar, entered with a hasty step. He was almost venerable in appearance; yet, there was in his dark, quick eyes the brightness of unquenched loves, the fires of which were kindled at the altar of selfishness and sensuality. This I saw at a glance. There was a look of concern on his face, as he threw his eyes around the bar-room; and he seemed disappointed, I thought, at finding it empty. 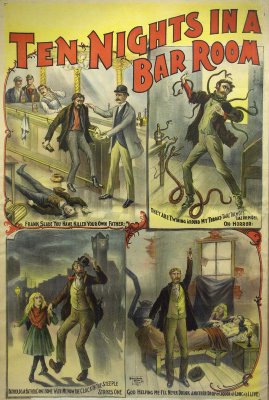 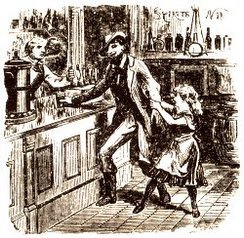 The novel became a stage hit, and the song Come Home, Father jerked tears from the eyes of millions.

Update II: A reader informs me that the "not work-safe" warning should come before the potentially embarrassing link. Well, how was I supposed to know? I'm a "clean" blogger, thank you very much.
Posted by Focko Smitherman at 8:26 PM