Now for the foxes

Taking out the trash late last night I spotted a fox making its way down 27th Street past our house. He seemed quite relaxed, trotting back and forth across the street, pausing at bush or tree for a considered sniff, and (probably) keeping an eye out for a late-night cat- (or rat-) snack.

Quite strangely (again, I was taking out the trash), I had my camera with me, so I trailed after him for a minute. But it was dark, obviously, and he wouldn't let me get close enough for a flash shot.

Not the first time I've seen a fox in the neighborhood (both, I think, were red foxes), and while these ain't exactly the mean streets, they're certainly the highly irritable streets of the Big City. To see such a stereotypically woodland creature looking to "score" around here is strange.

But it turns out that red foxes are fairly common in Denver. In fact, I found a whole page on them at the magical Denver.gov site. Outstanding quote:

What to do for foxes teasing the dogs:

Keep the dog in the house or in the garage at night and early in the morning for a few days. The fox will lose interest and stop coming around. Foxes seem to have quite a sense of humor. They seem to enjoy watching the dog running back and forth and barking.

They're not the only ones. (That's Billy Bob being tortured, of course).

And I actually got a picture of a red fox out on the town once, across the street from Sloan's Lake Park a little west of here: 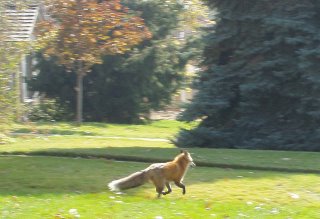 He was a big healthy looking bugger, too. Beautiful.
Must be the all-Canada Goose diet at Sloan's Lake.

Like the bear cub found sleeping under the roller coaster at Lakeside Amusement Park a few years ago. That's in this part of town too. Now, even though I distinctly remember reading about it, I couldn't find the incident mentioned in either the Rocky Mountain News or the Denver Post. No, where I finally found it, logically enough, was in the completely sane Dave Althoff, Jr.'s utterly unobsessive Roller Coaster Almanac. Between entries like

January 3--1984: A woman was killed when she fell from the {Matterhorn Bobsleds} roller coaster at Disneyland.

March 30--1999: Press day for {Apollo's Chariot,} new Speed Coaster from Bolliger & Mabillard, at Busch Gardens Williamsburg, Williamsburg, Virginia. During the ceremonial first ride, a celebrity rider, male model Fabio, is struck in the face by an errant bird. Fabio was not seriously hurt; the bird may have been killed.

September 3--2001: A bear cub was found sleeping under the roller coaster at Lakeside Park, Denver, Colorado.

Thanks, sane and unobsessed Dave!