Ten Nights in a Bar-Room II: The Drunkening

Actually, just a selection of pics 'n' links to TNIABR-related stuff. Even in this soul-draining septic tank of a blog you gotta feed the algae* every once in a while, but it's XXX-mas night for me and the Drunkawife, if you know what I mean (and if you do, please e-mail and explain it to me), so this is gonna have to do for tonight:

A colorful cover from a 2000 reissue by Applewood Books (at Amazon).

A still from a 1926 all-black version shown in a "Race Films Series" at the University of Chicago in 2001: 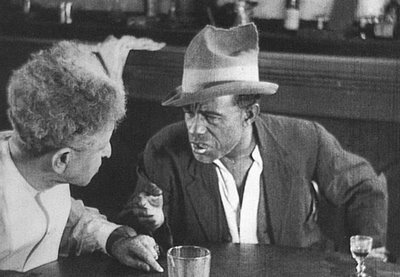 The stars of many of these films seem a little, um, pale, don't they? Was this usual in early African American stuff?

This film, based on a popular temperance play performed in black communities, features two of the leading black stage actors of the day: Lawrence Chenault as a shady bar room proprietor and Charles Gilpin as a drunkard. The production company, the Colored Players Film Corporation, was founded in 1926 by white producer David Starkman, who produced popular melodramas about black families and communities. Ten Nights enjoyed the longest continuous run of any race film in the silent era: four weeks at New York City’s Grant Theatre.

Of course, it wasn't popular only in black communities. Here's the cast of an 1896 stage production, from the "Yancey [County, NC] Visions" page: 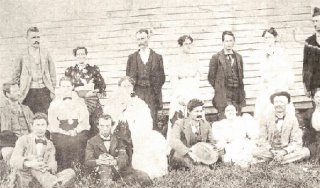 Here's a comedic version from 1920 called Ten Nights Without a Barroom (get it?), starring the apparently ubiquitous Tom Kennedy. Can't tell if it's available anywhere.

Finally, here's a review of the 1931 version starring the equally ubiquitous William Farnum. This version is out on VHS and can be ordered here (scroll down; third from bottom).

*the word "algae" does not refer to most Drunkablog readers.

Update: Talk about your ubiquitouities, Slim Summerville, second-billed in Ten Nights Without a Barroom, got around a good bit himself.

Update III: It wasn't a wastebasket, goddamnit, it was a solid waste storage facility, extra small.
Posted by Focko Smitherman at 11:53 PM