Boy, the blogeratin' ain't goin too well at all. Every day I'm busy, and even if I weren't, it's too freakin' hot. To blog. That's really hot. And the Drunkablog has a life besides blogging, you know. Some pictures instead:

This is the licence on a vehicle owned by the peasant who farms the Drunkablog acres (and many others'). (Update: Jeff Gordon? Git them brats a yourn and git off'n my propity!) 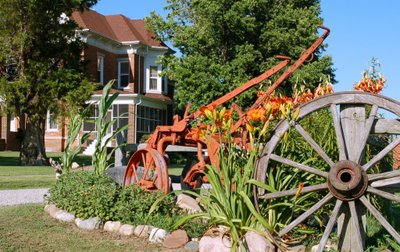 The peasant's house. Knowing what he does about farming, the Drunkablog felt competent to demand: Peasant! Why isn't this plow in use, you lazy . . . (sounds of whipping) Peasant: Please, sir! I won't do it no more! Ha ha! (I reply) Then you won't mind removing your underwear! Peasant: Please, sir, not my unde--

Sorry. Here's a picture of a foodstuff:

Yes, it's corn. Glorious corn. Bow down before it. Bow down if you want to live! The corn grows angry!
Pretty good crop this year, he said like he knows what he's talking about, if the Japanese beetles leave anything: 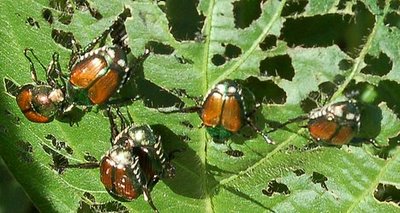 They eat and hump at the same time. Nature knows how things are supposed to be.

The Drunkablog's forebears were always improving the land for their sharecroppers. Today, the tradtion continues! Check out this recent improvement: 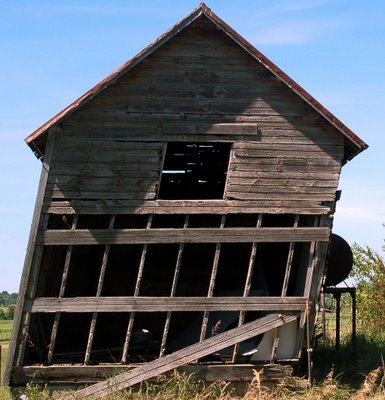 What? It holds stuff.

This last pic has nothing to do with anything. 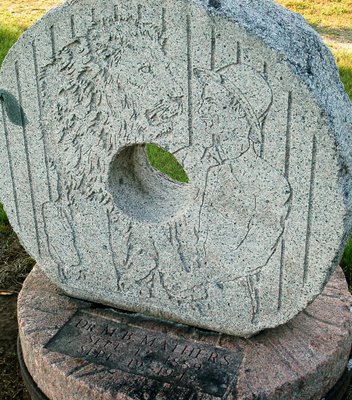 The Drunkablog's great-uncle Manley Mathers'
tombstone in Mason City, Illinois.
Manley was a Great White Hunter, and had a menagerie on his farm just outside town that had elephants and monkeys and a zebra or two, among other animals. In the late 40s or early 50s it caught fire, and all the animals died. By today's standards I'm sure Manley didn't treat the poor creatures very well. For many years the lion cage sat empty next to Route 29.

Manley died in 1949. An inscription at the very bottom of the upright millstone reads, "Our Doc"--with the quotation marks, so probably no one ever called him that.

Believe it or not, the menagerie fire was caught on film. I've made a couple of feeble attempts to get hold of it, but no luck yet.
Posted by Focko Smitherman at 6:38 PM