Maybe "startling" isn't the right word. "More" is probably better. Been reading Matt Ridley's The Rational Optimist. Good stuff, generally speaking, though nothing earth-shattering to (Julian) Simonists. We're not all gonna die (at once, anyway).

But one thing Ridley mentions the D-blog had never heard of before. In a hunk where he's discussing the social progress capitalism has led to, he notes the abatement of cruelty to animals, and particularly, blood sports.

It's not in the index, goddamnit, but one blood sport that died out because of capitalism, he claims, is:

Fox tossing? Bear baiting, cock fighting, doggie death-duels, I know about. But fox tossing was a new one. At first I thought it was some weird editing mistake, but sure enough, mankind's savior, Wikipedia, put me some Knowledge:

Fox tossing would take place in an arena, usually either created by setting up a circle of canvas screens in the open or by using the courtyard of a castle or palace.[1] Two people would stand six to seven and a half metres (20 to 25 feet) apart, holding the ends of a webbed or cord sling which was laid flat on the ground. An animal such as a fox would then be released from a cage or trap and driven through the arena, across the sling. As it crossed the sling the tossers pulled hard on the ends, throwing the animal high into the air.[2] The highest throw would win the contest; expert tossers could achieve throws of as high as 7.5 m (24 ft). On occasion, several slings were laid in parallel, so that the animal would have to run the gauntlet of several teams of tossers.[1]

Nice. Here's an illustrative woodcut or whatever, also from Wiki: 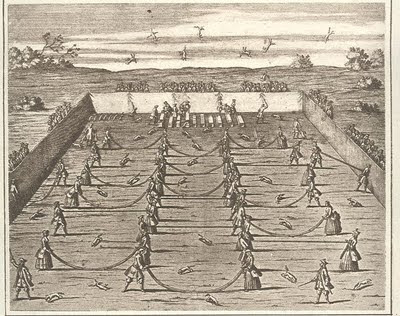 Notice the little things mostly lying around all dead-like? Foxes.

Update: By the way, there are two footnote [1]s in Wikipedia's explanation. As far as I know, Wikipedia has never before made a mistake. Something wrong!

Update II: Just noticed another thing: the chicks pulling on the goddamn cords in the illustration. Hot, hot, hot.
Posted by Focko Smitherman at 3:57 PM