Not a big fan of Norman Mailer or his work (though the first half of The Executioner's Song is great), but there is a tiny connection. His "literary executor and biographer," J. Michael Lennon, quoted announcing his death at the top of the AP's obituary, was years ago the publisher of the little (not "little," just little) magazine I worked for.

Even then Mike (his first name is John, hence the "J. Michael" business) was always jetting off to hang with "Norman," or planning projects around Norman, or writing about Norman, or, especially, talking about Norman. This naturally engendered a certain cynicism among the younger staff, both toward "Normie," as we invariably called him, and toward his (eye rolls implied it) li'l buddy, Mike.

But look at him now: literary executor and official biographer of one of the most famous writers of the 20th century.

But I have my doubts that Lennon (who's a good guy, by the way) can shake off decades of training himself around Norman's hellish personality and write something reasonably balanced. 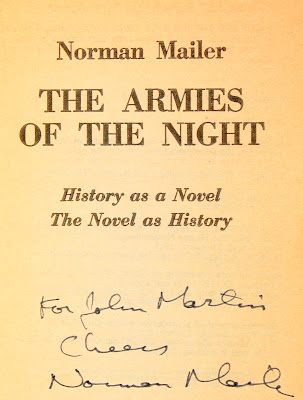