When last we saw Our Hero, Professor Bruce E. Johansen, he was living down the unbearable shame of having resigned from the Investigating Subcommittee of CU's Standing Committee on Research Misconduct—the subcommittee charged with taking a look at various fabrication and plagiarism charges leveled against then-Professor Ward Churchill. Johansen resigned his post on the five-member subcommittee after it came to light (here on PirateBallerina, and unbeknownst to me, the day before in the Boulder Daily Camera) that he'd already voiced his high opinion of Churchill several months previous. After he resigned from the subcommittee (along with fellow pro-Churchillite Robert A. Williams), Johansen grumbled a bit, and then fell off our radar.

Apparently, however, PB did not fall off Johansen's radar. Thanks to a PB reader, Waldo Pepper, I've become aware that Johansen recently published a book entitled Silenced! Academic Freedom, Scientific Inquiry, and the First Amendment under Siege in America (Praeger Publishers, 2007), wherein Johansen demonstrates how loathing turns to obsession, and obsession turns to fabulism. From the very first page of the book's Preface, Johansen wallows in an ecstasy of imagined martyrdom while twisting the facts to substantiate his later characterization of me and PB:

Very quickly, some Denver print and broadcast media, fed by an anti-Churchill Web site, Jim Paine's pirateballerina.com, busied themselves questioning Williams's and my impartiality because we had defended Churchill's free-speech rights in public, a matter that was not under investigation.

As Paine points out, Johansen defended more than Churchill's "free-speech rights in public":

I can't speak for the "Denver print and broadcast media" but I can say that what PB highlighted was public praise for Churchill's scholarship from both men. From Johansen: "The present controversy has focused on only a tiny fraction of Prof. Churchill's work. I have read some of his books, and find them to be well-argued and intensively documented in a scholarly manner. He occasionally has referenced my work, and he has done so properly." From Williams: "...[A]nyone who's followed the field of American Indian Studies for the past three decades would immediately recognize Ward Churchill as an important scholar, writer and advocate, whose published works are widely cited and relied upon." Churchill's scholarship, and his writing, and his documentation—I believe—was under investigation.

Yes, yes it was. Read the whole thing, for it is--funny? Ludicrous? Pathetic? Sickening?--all of the above, and amply demonstrates how easily left-wing academics mistake a florid persecution complex for scholarship. 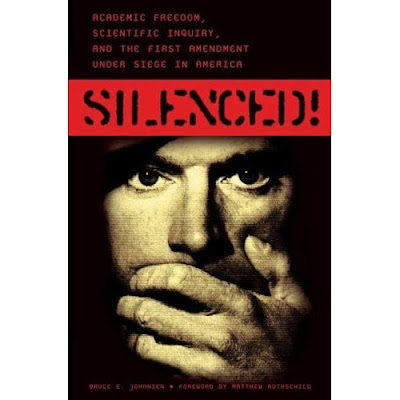 They used Jim Paine's actual hand for the cover illustration. You can tell because he has only three fingers, the invariable sign of a congenital right-wing dissent-silencer.
Posted by Focko Smitherman at 8:40 AM