First let's get the contextless headline out of the way--"Ethics club to repair reputation"--so we can go right to this week's old-timey-Denver picture: 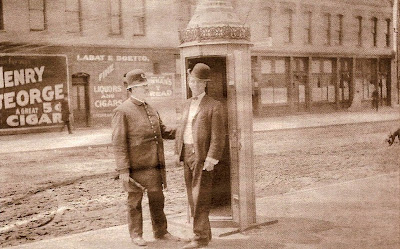 The caption reads: "A Denver policeman detains an intoxicated man in front of a 'drunk tank' on Larimer Street in 1905."

Are they (or rather the book Historic Photos of Denver, where the pic is collected) talking about that metal cylinder behind the cop and the (amazingly devil-may-care) souse? That's a drunk tank? Which they'd stick living people in? Just for being drunk?

A slight google of drunk tank pulls up (besides what everyone knows as a "drunk tank"--a jail cell reserved for drunks) a moronically obscene urban dictionary joke (who knew Benjie Whitmer wrote entries?) and this little nugget from Bohemica.com (all sic):

Záchytka is a wonderful Czech word that stands for the institution for the collection of drunken (and possibly disorderly) individual wondering city streets occasionally referred to in English as 'drunk tank' or 'sobering-up station'. It was invented by the Czech Czech psychiatrist Jaroslav Skála and opened on 15 May of 1951. The first client was an inebriated Russian naval engineer. By 1981 there were 63 such institutions who had served one million drunks. According to the Czech Wikipedia entry this was replicated around the world. Yet another Czech contribution to the world!

Indeed. Nothing, however, about the existence of individual-sized, lockable facilities for the inebriated. Were drunk Denveronians actually confined inside these barbaric public contraptions? For how long? Who cleaned them out in the morning (the tanks, not the drunks)? They were cleaned out, weren't they? Why aren't we still using them today? And so on.

Update: The Drunkablog: member in good standing of the Institution for the Collection of Drunken (and Possibly Disorderly) Individual Wondering City Streets. ("Over one million drunks served!"™)
Posted by Focko Smitherman at 5:41 PM