Keeping up with: Peter Kirstein!

The unendearingly dopey professor of history and ardent Ward Churchill supporter elucidates on an AP story about the rising rate of desertions among U.S military personnel:

According to the Associated Press in an article written by Lolita C. Baldor [it's Baldur--ed.], the imperialist wars in Iraq and Afghanistan are beginning to take an increasing toll on the willingness of soldiers to participate in this aggression. In the army that takes the brunt of the casualties [and we all know which army that is], 9 out of every 100 soldiers in fiscal year 2007 which ended on September 30 took to the highway.

That's got to be a typo, doesn't it? Not even Peter Kirstein could believe that nine percent of the entire U.S. Army deserted ("took to the highway") in fiscal year 2007 (which ended September 30), could he? You bet:

A year earlier it was 7 per 100. Some 4700 soldiers deserted, and should be given the Congressional Medal of Honour [note to JWP: heh].

The number the AP actually used, of course, was nine in 1000--and even that figure was subjected to debunkular contextualization at, probably among other places, American Thinker.

But what do you expect? Nobody reads Kirstein for facts. It's the writing we crave:

I am not claiming this is due to mere ideological awareness that torture, waterboarding, killing of p.o.w., baby-killing–which sometimes occurs in random acts of violence, shooting vehicles that dare traverse near checkpoints, assaulting buildings of civilians and generally creating an American Empire in the heart of the Muslim world are immoral and disgraceful.

We are not witnessing levels of heroic dissertions [you think you're going mad, don't you?] that were so impressive during the Vietnam Genocide. . . .

Read the whole thing, if you don't care whether you live or die. 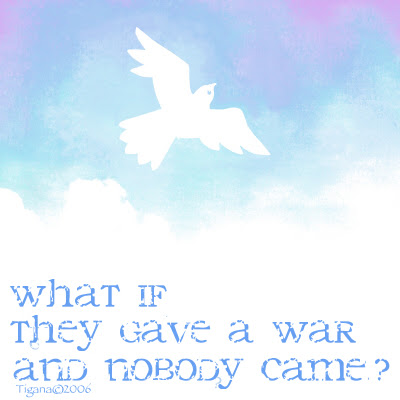 Update: Kirstein will be speaking to the Progressive Forum at the Empire Buffet in Matteson, IL, on Wednesday. He's really excited about it too, because (as he begins his latest post):

I was informed by George Ochsenfeld, the organiser of The Progressive Forum, that Phil Kadner, a columnist for the Southtown Star, will be covering my talk, “Towards a New Past: The Meaning of the Iraq War,” on Wednesday, December 19, 2007. The Daily Southtown merged with the Star in November. The papers are owned by The Sun-Times News Group which of course publishes the Chicago Sun-Times. In Chicago, besides the two major dailies, there are regional papers such as the Daily Herald and the Southtown Star that cover areas that by themselves would be one of the larger metropolitan areas in the nation.

I think the newly merged Southtown Star might be trying to get rid of good ol' Phil Kadner, don't you? Sure don't want to miss that piece.

Update: St. Xavier University, where Kirstein teaches, is rated one of "America's best colleges for 2008" by USNews.com.
Posted by Focko Smitherman at 1:14 AM