Several protesters were forcibly removed from the audience at a speech given by former Attorney General John Ashcroft at the University of Colorado at Boulder Tuesday night.

About 20 student protesters from CU and Naropa University, wearing shirts with "shame" written on the backs and wearing American flags over their faces, welcomed Ashcroft to the stage by standing up and turning their backs to him. 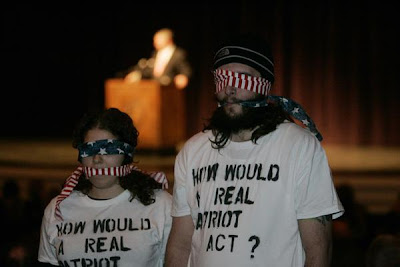 Hackneyed. (Photo by Dennis Schroeder, Rocky Mountain News, which said there were "about 10" protesters.)

The organizers of the event called in extra security from the Boulder Police Department at the last minute after hearing rumors about the protests, said Jessica Forthofer, chair of CU's Cultural Events Board, which was responsible for organizing the speech.

Last minute? Rumors? They couldn't figure out that this was inevitable?

But the small group of silent protesters from the Students for Peace and Justice were overshadowed by several other unidentified demonstrators who rushed the stage to confront Ashcroft repeatedly during his speech and the question-and-answer portion.

"I have a question," yelled one woman who was removed several times but kept finding a way back into the auditorium. "What medication are you on that you could violate our rights with such a clear conscience because I'd really like to get some." . .

Ashcroft remained calm while the crowd booed him loudly several times during his speech, including when he said Guantanamo Bay was a "good place" for detainees and that he was proud of the United States government and its self-policing of Abu Ghraib, but he lost his composure when a man in the audience called him a liar.

"For those of you who have nothing to learn," Ashcroft asked. "Why did you come tonight?"

For the same reason they come to speeches by other conservatives: to deny them their right to speak.
Posted by Focko Smitherman at 9:11 AM