The Pals of Lenny blog reminds everyone of the Frisco (as residents affectionately call it) appearance by Ward Churchill tonight, and adds this note: 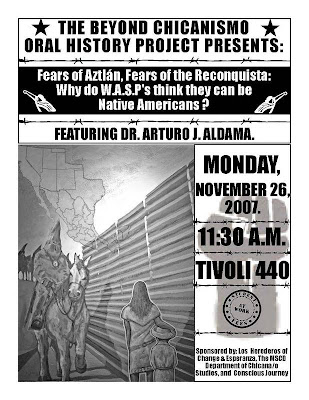 More important, you got Arturo Aldama, Ward Churchill's former colleague in the Ethnic Studies department at CU (he's still there; Ward, of course, ain't), who is also the originator if not the sole articulator of the famous intellectual defense of Ward known as the "defense by footnote volume" (scroll tiny bit). 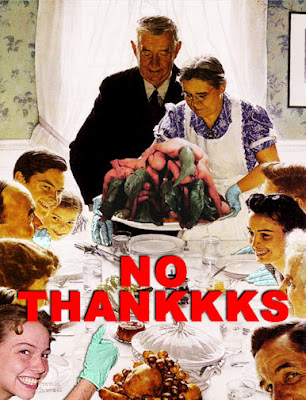 Whatever, but what's with the gloved hand and unidentified grinning phizette extreme lower left? (Shubel Morgan, where they got it, doesn't explain either).

Shubel Morgan, by the way, is fast taking over MIM's place in the Ashheap of History of My Heart.

Speaking of MIM, Snapple notes that Security Minister has posted another scuttlebutt (no "k") update. He's still making (as Maoists say) self-criticism--sort of:

We are grateful for global expressions of concern about us. We have said many times that the reactionaries can physically exterminate some MIM comrades. [Yes, but may we?] It would signal a desire for a chaotic escalation of conflict that MIM is confident the oppressed would get the upper hand in. So we would say MIM is not unreliable [but WE wouldn't, comrade]. The struggle MIM is tied up with cannot be stopped in its general outlines. There is only a question of direction and timing.

MIM always gets me hurling fast, sometimes even towards doom.

At the moment, MIM's day-to-day struggle among the exploiters goes very well.

But then this bit of showtrial-worthy self-accusation:

MIM is a party of exploiters led by imperialists. It is surrounded by professional spies. So if anyone concluded that MIM is an imperialist plot, it is a good guess. We cannot blame anyone for that. One must always be alert especially when it seems struggle grinds to a halt.

Security Minister's motto: If your mother tells you she loves you, she is an enemy of the people!
Posted by Focko Smitherman at 8:20 PM