Keeping up with: Peter Kirstein!

On the death of "baby killer" Paul Tibbets:

The captain of the Enola Gay, a weapon that perpetrated a holocaust over a city is typical of America’s disregard for non-combatants and a racist fury that has not abated since this evil moment in world history on August 6, 1945.

At least he can write.

Mr Tibbets was a colonel at the time but of course was later promoted to Brigadier General for his racist, butchery of untold magnitude. . . .

Remember the genocide forever and the evil nation that introduced nuclear weapons into the world’s arsenal. America, you are a killer nation that is responsible for some of the worst examples of state terrorism in human history.

Kirstein lists nine reasons why dropping the bomb was unnecessary. All, of course, have been refuted, repeatedly and in detail.

On fired DePaul professor and holocaust-minimizing antisemite Norman Finkelstein (got this via Marathon Pundit):

The Norman G. Finkelstein case represents more than one individual’s tragedy and expulsion from the academy. It represents a closing of the American mind. It affirms that revisionist or dissenting scholarship on Israel, the Palestinians, the Holocaust and the influence of the Israel Lobby is fraught with peril that only the tenured few can survive. Graduate students and non-tenured faculty, I am afraid, will avoid legitimate inquiry into these seminal topics for fear that a Dershowitz or other organized entity might engage in a campaign of personal destruction and succeed in intimidating and eviscerating a university’s capacity to exercise impartial judgment and evaluate fairly non-tenured faculty during their probationary period. . . . “We are all Professor Finkelstein” emblazoned the shirts of the intrepid professor’s supporters at the DePaul University fall convocation and during the first day of classes. Indeed we are: now and forever.

Now and forever. Well, as long as I can still be Ward Churchill, too. (Don't forget, by the way, that Kirstein has spoken at two of David Irving's "Real History" conferences.)

Finally, Kirstein writes about Thanksgiving, in a post embarrassingly titled, "Talking Thanksgiving Day Blues" (is there no 60s cliche he won't stoop to?):

The shame of America is its unbridled selfish racism and refusal to spread its bounty to even its own citizens much less other oppressed peoples of the Earth.

Thanksgiving is a farce and a charade because we should not emphasise the nation’s bounty and wealth, but as a result of this monstrous nation’s actions, why so many have so few. The purpose is not to be thankful for what some have but determined to see a radical distribution of the nation’s resources in a manner whereby the ruling elites are brought to account for their policies of blind pursuit of wealth, imperial overstretch and lack of redistributive justice.

As he sometimes does, Kirstein includes a little art with the post: 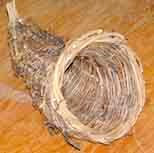 Get it?
Update: For those who enjoy every little instance of Kirstein's genocide of the English language, he spells the word "scuttle," "skuttle" and the word for those things soldiers receive, "metals."
Posted by Focko Smitherman at 12:31 PM