Every year little kids write picture essays about Thanksgiving and what it means to them. Here's one from the ironically named Jo Swift, who apparently is an adult (bold, sic):

Thanksgiving Day: What Are We Giving Thanks For? The Extermination of Native Americans?

I'm so angry about

We should replace the feasting with fasting

and create a National Day of Atonement

to acknowledge the genocide of indigenous people

that is central to the creation of America

While the concept of genocide, which is defined

as the deliberate attempt “to destroy, in whole

or in part, a national, ethnic, racial or religious group,”

it accurately describes the program

that Europeans and their descendants pursued

to acquire the territory that would become the USA. . . .

Mercifully, the bold stops there, but Swift doesn't, moving on to deny, like a true Marxist, that humans have anything that might be called an inner life:

The argument that we can ignore the collective cultural definition of Thanksgiving and create our own meaning in private has always struck me as odd.

This commitment to Thanksgiving puts these left/radical critics in the position of internalizing one of the central messages promoted by the ideologues of capitalism --that individual behavior in private is more important than collective action in public.

The claim that through private action we can create our own reality is one of the key tenets of a predatory corporate capitalism that naturalizes unjust hierarchy, a part of the overall project of discouraging political struggle and encouraging us to retreat into a private realm where life is defined by consumption. 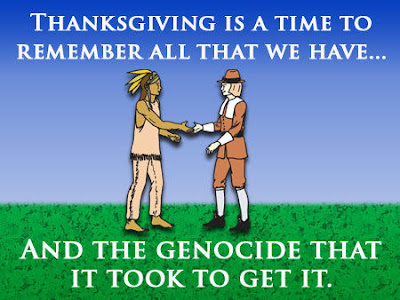 Posted by Focko Smitherman at 9:59 AM