In writing about other stuff, commenter Hilda links to this photo of Ward Churchill at the San Francisco (natives call it "Frisco") Anarchist Book Fair in 2005. Hadn't seen it before, and liked it immediately: 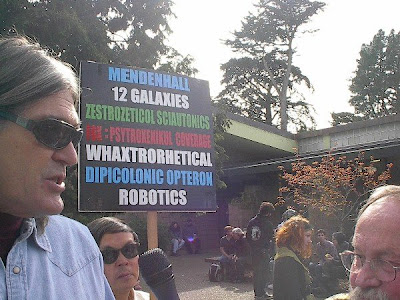 Update II: Ah, memories: Zombie panicked America with his/her/its photoessay on this very same book fair--or rather, with a single picture from it--the now iconic photo of Inflated Scrotum Guy. (Scroll down, you can't miss him. Yes, I know you've seen him before. Look at him again. I said LOOK! It's Noam Chomsky, isn't it?)