Witnesses told police that a man wearing a black mask, black jacket and blue jeans entered the stores carrying a sword. The armed robber took an undisclosed amount of cash and fled on foot from both stores, police said.

Officers searched the area but didn't find the robber or the weapon, which was described as a "bat'leth."

A commenter note, "It's a good thing he [the clerk, I guess] wasn't a red shirt ensign, those guys go down every episode," to which another commenter appended: 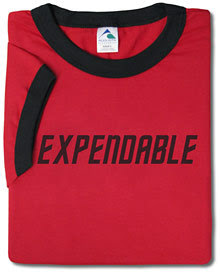 Posted by Focko Smitherman at 3:46 PM